Arsenal & Liverpool Stars Selected: How England Should Line-Up vs Russia

Euro 2016 kicks off this week and England will get their tournament underway against Russia on Saturday. Here is the line-up we think Roy Hodgson should pick The 2016 European Championships kick off later this week and England will get their tournament underway against Russia on Saturday night. Here is the line-up we think Roy Hodgson should go for.

Very little debate over this one to be honest. Joe Hart is widely expected to be England’s No.1 after another solid season with Manchester City.

The back four is less clear cut as all-but one of the positions is up for debate. Manchester United’s Chris Smalling is almost certain to start leaving Chelsea’s Gary Cahill or Everton’s John Stones battling it out to partner him. Cahill is the experienced option but Stones is a supreme talent who would arguably compliment Smalling better, so I’d go with the Toffees youngster.

Both full-back spots are uncertain with Kyle Walker, Nathaniel Clyne, Danny Rose and Ryan Bertrand all well-matched. That’s helpful if we’re to pick up injuries but it does give Hodgson an initial selection dilemma. However, in the end, I think Clyne just has the edge over Walker while Rose should get the nod over Bertrand at left-back.

Tottenham’s Eric Dier is nailed-on to start in the defensive midfield role after an impressive season but there is fierce debate not only over who should play alongside him but which formation we should play.

Hodgson has gone with the diamond in the warm up games so I think it’s safe to say he’s going to stick with it at the Euro’s and while this may be slightly controversial, I think the England boss should go with Jack Wilshere and Jordan Henderson.

Wilshere endured an injury-plagued season with Arsenal so many feel he shouldn’t even have made the squad but the flip-side is he’ll be fresh and he’s our most creative talent in the middle of the park, so we need him to start.

Henderson is also lacking match fitness having only recent returned from injury but I think he’s a much better option to his Liverpool team mate James Milner and we need his energy in midfield.

Dele Alli needs to play at the tip of the diamond to get the best out of him which would see Wayne Rooney start alongside Harry Kane up front. Yes, it’s harsh to leave Jamie Vardy out but Hodgson is never going to leave Rooney out and Vardy can be a dangerous weapon to have from the bench.

Daniel Sturridge is another who will feel aggrieved but as I say, Rooney is going to start and Kane certainly deserves to lead the line up front.

So this would be our eleven on Saturday: 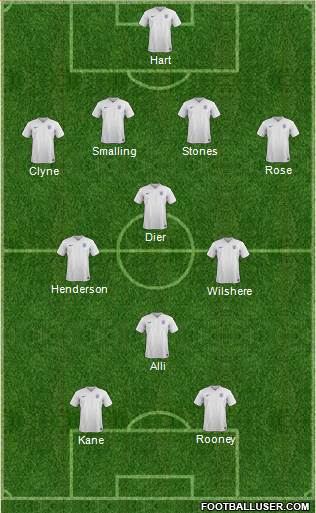 It’s certainly going to be interesting to see how Hodgson decides to line-up this weekend but the good thing is he has plenty of options. The concern is maybe he has too many options and doesn’t know his best team but we have to put our faith in Roy to come up with a winning formula. The bookmakers seem to think we have a chance as we’re among the favourites to win the Euro’s and the odds favour an English victory against Russia on Saturday. It’s vital we get off to a good start and England are the 19/20 favourites to pick up three points in their Group B opener. Victory over the Russians would put Hodgson’s men in a strong position to at least qualify to the knockout stages so let’s hope we can get the job done.

What do you think? What team would you put out?