Roy Hodgson’s starting line-up for England’s Euro 2016 opener against Russia has been leaked to the press. See who’ll be lining-up tomorrow night here Roy Hodgson’s starting line-up for England’s Euro 2016 opener against Russia has seemingly been leaked to the press as the Mirror are one of several newspapers who are claiming they know who the XI will be tomorrow night.

The newspaper claims that Hodgson has decided to ditch the midfield diamond that he favoured during the pre-tournament warm-up games in favour of a more attacking 4-3-3 formation.

As expected, Joe Hart will start in goal with Tottenham full-backs Kyle Walker and Danny Rose preferred ahead of Liverpool’s Nathaniel Clyne and Southampton’s Ryan Bertrand – who’s been struggling with injury over the past week.

Manchester United’s Chris Smalling will seemingly be joined by Chelsea’s Gary Cahill in the middle of defence as Hodgson goes for experience with Everton youngster John Stones among the substitutes.

Eric Dier will sit in the defensive midfield role with Spurs team-mate Dele Alli playing just in front and the duo will apparently be joined by Wayne Rooney in midfield. The Manchester United star impressed in a deeper role during the closing stages of the season and it looks like Hodgson is now set to unleash his captain in a midfield role for his country, too.

That means there will be no place for Arsenal midfielder Jack Wilshere in Hodgson’s starting eleven. The 24-year-old has just come off the back of yet another injury-plagued campaign and it looks as though his lack of match fitness has cost him a place in the England team.

Liverpool midfielders Jordan Henderson and James Milner will also miss out but the the Mirror claim Adam Lallana will start in attack along with Manchester City’s Raheem Sterling – who’ll be selected ahead of Leicester City striker Jamie Vardy.

Here is how the Mirror claim England will line-up against Russia: 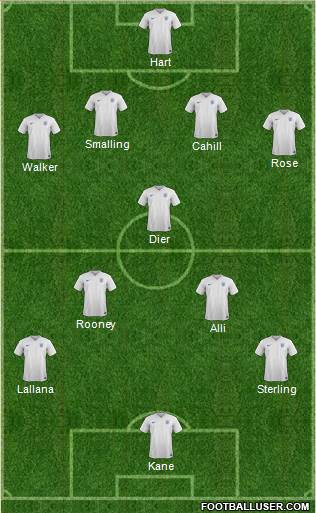 It’s certainly a bold selection if this is the team Hodgson goes for tomorrow night but the formation could easily adapt in to a 4-2-3-1 with Alli dropping in alongside Dier and Rooney moving a little further forward behind Kane.

It’s vital England get off to a positive start with a win over Russia on Saturday evening as anything other than three points would leave the Three Lions under pressure just to get out of Group B. As it stands, England are the 19/20 favourites with matchbook.com to win tomorrow night but we don’t usually start very well in major tournaments so if I was a betting man, I’d back the draw at 5/2.