Arsenal’s Aaron Ramsey, Liverpool’s Joe Allen and West Ham’s Dimitri Payet have all been maned in the official Euro 2016 Team of the Tournament. Arsenal’s Aaron Ramsey, Liverpool’s Joe Allen and West Ham’s Dimitri Payet have all been maned in the official Euro 2016 Team of the Tournament.

Ramsey was a key driving force behind Wales’ march towards the semi-finals and was sorely missed as they crashed out 2-0 to eventual champions Portugal with the Arsenal midfielder cruelly ruled out through suspension.

However, Ramsey has been rewarded with a place in the Team of the Tournament and is joined by Welsh team mate Joe Allen with the Liverpool midfielder selected after putting in several consistent performances in France.

Payet is the final Premier League representative and the West Ham attacker set the tone for an excellent tournament after scoring a stunning late winner during France’s opener against Romania.

Unsurprisingly Antoine Griezmann makes the team after scoring six goals through the tournament while Cristiano Ronaldo leads the line up front despite being forced off in the final win over France through injury.

Germany’s Toni Kroos, Jerome Boateng and Joshua Kimmich all make the eleven along with Portugal defenders Pepe and Raphael Guerreiro and goalkeeper Patricio.

Here is the official Team of the Tournament: 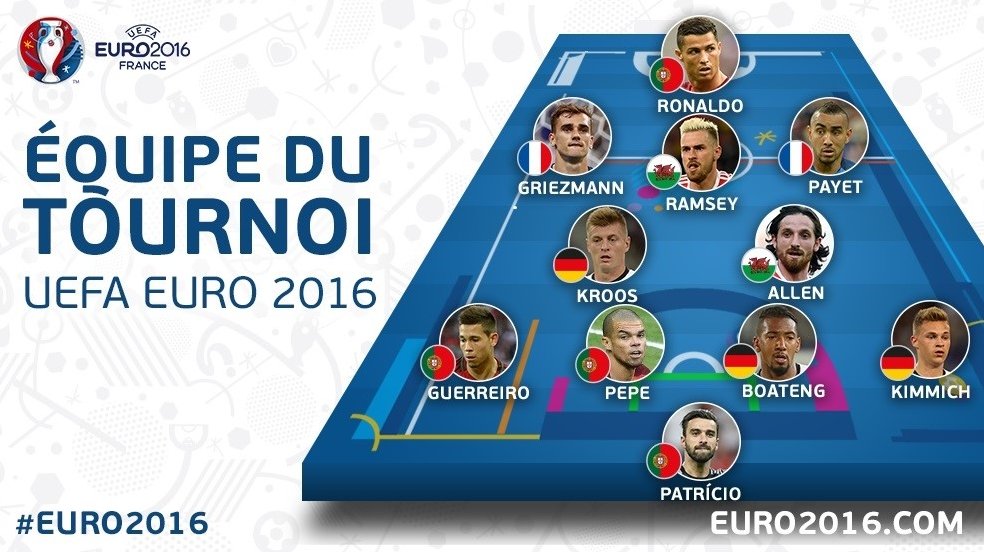