Liverpool To Battle Chelsea Over Signing Of Premier League Attacker

The summer transfer window is now open for business so we’ll bring you all the latest transfer rumours and gossip from around the globe. Today, Liverpool and Chelsea are linked with Andre Ayew…. 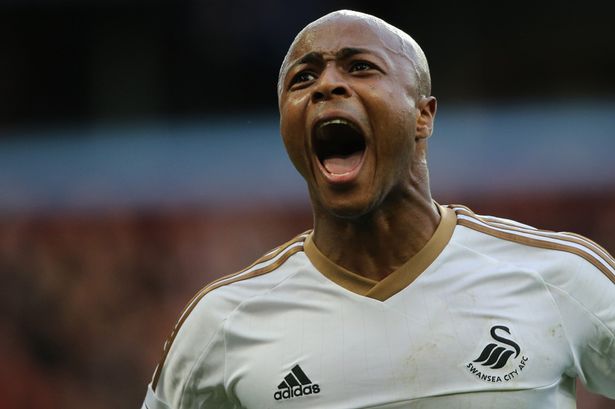 Liverpool are ready to battle-it-out with Chelsea over the signing of Swansea City attacker Andre Ayew after Francesco Guidolin admitted he may leave the club this summer, according to the Metro.

Ayew made his name at Marseille before making a move to Swansea last summer and the attacker enjoyed a fine debut season in the Premier League after scoring 12 goals as well as providing 5 assists in his 34 games.

The Ghana international’s form has led to speculation that he could be moving to a bigger club and Swansea boss Francesco Guidolin fuelled the rumours after admitting recently that Ayew could leave the Liberty Stadium this summer.

The Swans boss is quoted as saying by the Metro:

‘Andre is a good guy and a good player, I hope he stays with us but I don’t know,’

‘It is important to keep him, but it is not my job. My job is to train and to get the team to play well and to get good results. I am confident he will stay.’

The Metro are now citing reports coming from the players home country that claim Liverpool and Chelsea have been showing a keen interest in signing Ayew this summer and are leading West Ham in the race for his signature.

The newspaper suggests that Chelsea have identified Ayew as a possible new recruit as new boss Antonio Conte continues to try and revamp the squad he inherited from Guus Hiddink.

The Italian tactician has already splashed out on midfielder N’Golo Kante and striker Michy Batshuayi but it appears the former Juventus coach wants to strengthen his attacking options with Ayew among his targets.

However, the Blues could face competition from Liverpool as the Metro suggest that Jurgen Klopp is also eyeing a move for the 26-year-old as he looks to build a squad capable of breaking in to the top four this season.

Klopp has already been extremely active in the summer market bringing in six new signings including Sadio Mane and Gini Wijnaldum but it looks like the German coach wants even more options in attack and he could do worse than turning to Ayew.

The Ghanaian star is capable of playing anywhere across the attacking positions including up front so his versatility would be a useful asset and I think he’d be a decent signing for either Chelsea or Liverpool this summer.