A midfielder has confirmed he’s finally completed his long-awaited £3m move to Arsenal after posting a photo of himself signing his contract.

The summer transfer window is in full swing so we’ll bring you all the latest transfer rumours and gossip from around the globe. Today, Arsenal complete the signing of Kelechi Nwakali… 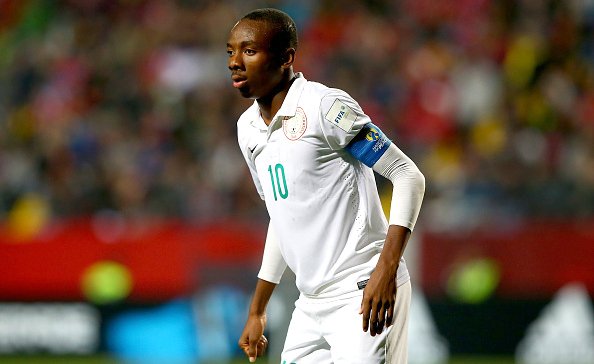 Nigerian youngster Kelechi Nwakali has confirmed he’s finally completed his long-awaited move to Arsenal after posting a photo of himself signing his contract on social media.

Nwakali has been strongly linked with a move to the Emirates in recent months after catching the eye of Arsenal scouts when he led the Nigerian Under-17’s to victory at the youth World Cup in Chile last year where he was named as Player of the Tournament.

The Daily Star reported that we agreed a £3m deal with the Diamond Football Academy in Nigeria for Nwakali’s signature but the proposed move was delayed due to work permit issues.

Those problems were overcome but the 18-year-old has been forced to wait to wrap-up his move to Arsenal due to a number of international commitments with the Nigerian Under-20 squad.

However, the young midfielder was finally able to fly in to London earlier this week to conclude his switch and it looks like the deal has been finalised as Nwakali has posted a photo on Twitter of him in his Arsenal gear signing his contract.

The player confirmed the good news after saying:

“I am officially an Arsenal player.

“Thanks to God and my family and friends. Hard work starts now!”

Arsenal are yet to make any official comment on the news but the chief executive of Nwakali’s former club has confirmed the transfer went through on Wednesday. Emeka Amajiriaku is quoted as saying by the Daily Star:

“Kelechi has signed with Arsenal, it is now a done deal,”

“He signed the contract at 3pm Wednesday.

“His mother and brother Allwell were there. Manchester City loanee Chidiebere Nwakali came all the way from Norway to London to witness his brother signing the contract.”

Nwakali has played as a central midfielder his entire career so far and the exciting teenager is expected to play for the Arsenal Under-21’s development squad this coming season.

The Nigerian ace has also been posting photos from behind the scenes at London Colney after taking part in training yesterday. Check out his snaps below:

I am officially an @Arsenal player.Thanks to God and my family and friends.Hard work starts now! pic.twitter.com/SCdi9j5bY4

With my bro and thanks to @Nike @nikefootball for the boots.. pic.twitter.com/WhYcX6rKdQ