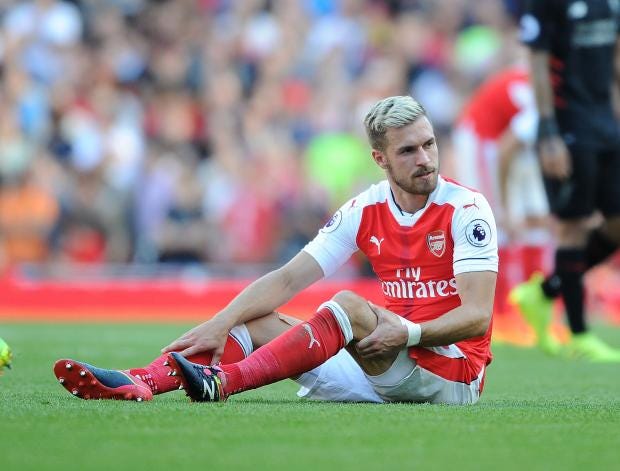 The Gunners let slip a one-goal lead as the visitors raced 4-1 ahead thanks to some fantastic goals and while Arsenal pulled it back to 3-4, they couldn’t find the equaliser so slumped to an opening day defeat for the second consecutive campaign.

To compound the north Londoners misery, Ramsey was forced off shortly after half-time at the Emirates and Wenger has confirmed the Welsh international suffered a hamstring injury.

In an untimely double blow, Iwobi was also substituted early in the second half and the Arsenal boss has revealed that the young attacker picked up a thigh injury but no indication has been given as to the severity of the injuries just yet.

on how Ramsey is…
I don’t know, I haven’t spoken to the medical people.

on what his injury is…
Hamstring.

on Iwobi’s injury…
It’s a thigh.

Both Ramsey and Iwobi are likely to be further assessed at London Colney today to find out the full extent of the injuries but Arsenal will be sweating over the results as losing another two key players is the last thing Wenger needs.

Per Mertesacker, Gabriel and Danny Welbeck are all nursing long-term injuries while Mesut Ozil, Laurent Koscielny and Olivier Giroud all sat out the Liverpool game due to a lack of match fitness.

There is no guarantee any of the trio will be ready for Arsenal’s trip to champions Leicester this weekend so Wenger will be praying for good news on the Ramsey and Iwobi injuries.