The summer transfer window is in full swing so we’ll bring you all the latest transfer rumours and gossip from around the globe. Today, more on Gabriel Barbosa’s proposed move to Man Utd…. 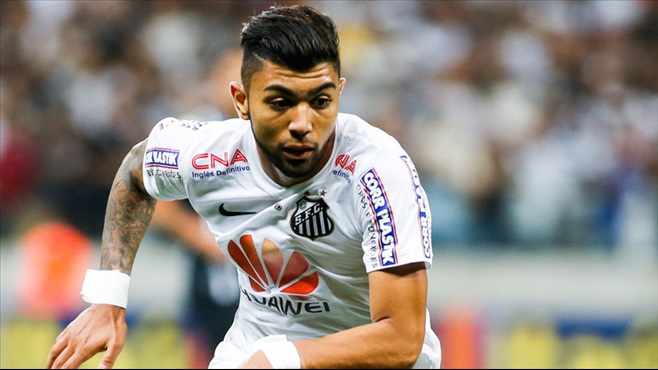 The agent of Santos striker Gabriel Barbosa has played down reports suggesting that the Brazilian youngster is on the verge of making a £26m move to Manchester United, according to the Metro.

Barbosa has become one of the most sought after players in Brazilian football since breaking in to the Santos first team set-up three years ago and has been hailed as the ‘new Neymar’ back in his homeland.

The 19-year-old has caught the attention of several clubs throughout Europe with Man Utd understood to have been battling it out with the likes of Chelsea, Leicester, Inter Milan, Juventus, Bayern Munich and Atletico Madrid for his signature [source: Sun].

It looked as though Barbosa was heading to Old Trafford as the Sun reported earlier this week that United chief Ed Woodward had met Santos president Modesto Roma where he supposedly thrashed out a deal that would see the Red Devils pay £26m to the Brazilian club for the striker.

Despite the growing interest in his services, the newspaper said that Barbosa had his heart set on joining United and the Manchester giants had sealed the deal after agreeing to cover his agents £4m commission fee.

So it looked as though Jose Mourinho was set to seal his fifth major signing of the summer with Barbosa – also known as Gabigol – expected to following Eric Bailly, Zlatan Ibrahimovic, Henrikh Mkhitaryan and Paul Pogba in making the move to Old Trafford.

However, it appears those rumours are wide of the mark as the strikers agent, Wagner Ribeiro, has played down the idea that Gabigol is set for United. When asked about reports of an impending move to Old Trafford, Ribeiro is quoted as saying by the Metro:

Obviously the agent could be keeping things under wraps until the deal is finalised but the chances are the reports of a ‘done deal’ with United are wide of the mark.

Mourinho has already spent in excess of £150m this summer and with Marcus Rashford, Wayne Rooney, Anthony Martial and Zlatan Ibrahimovic to choose from up front, another striker isn’t a priority this summer.