Liverpool take on Burnley at Turf Moor on Saturday afternoon. Here is the team we think Jurgen Klopp will select for the game.

Liverpool will be hoping to build on their excellent Premier League opening win over Arsenal when they take on Burnley at Turf Moor on Saturday afternoon. Here is the team we think Jurgen Klopp will select:

Goalkeeper: With summer signing Loris Karius cruelly ruled out with a hand injury, Simon Mignolet is set to keep his place between the sticks.

Defence: Klopp has confirmed that Mamadou Sakho is getting closer to full fitness but the French international isn’t expected back any time soon so Ragnar Klavan should keep his place alongsdie Dejan Lovren in defence.

Alberto Moreno was widely criticised for his performance against Arsenal and with James Milner now back in contention after recovering from a heel injury, the versatile Englishman is set to start at left-back. Nathaniel Clyne should keep his place at right-back.

Midfield: Emre Can made a successful appearance off the bench last time out after recovering from a minor knock and the German international is expected to come in to the midfield this weekend.

Summer signing Gini Wijnaldum could be the man to make way with Jordan Henderson keeping his place in midfield.

Attack: Liverpool breathed a huge sigh of relief after Sadio Mane’s shoulder injury was confirmed as nothing more than minor muscle damage. However, Klopp has hinted he won’t take any chances with the attacker this weekend so we could see Roberto Firmino move out to the right wing.

This would allow Daniel Sturridge to make his return up front after recovering from a hip injury that kept him out of the trip to the Emirates while Divock Origi is also pushing for a start up front.

Adam Lallana and Philippe Coutinho should keep their places in attack after excellent goal-scoring displays against the Gunners.

BACK  LIVERPOOL TO WIN AT CRAZY ODDS OF 5/1 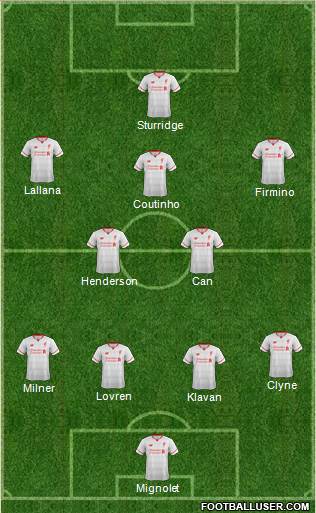