Chelsea will take on Watford at Vicarage Road on Saturday afternoon. Here is the side we think Antonio Conte will select for the game:

Chelsea will take on Watford at Vicarage Road on Saturday afternoon. Here is the side we think Antonio Conte will select for the game:

Goalkeeper: Thibaut Courtois is expected to keep his place between the sticks this weekend.

Defence: Conte played a flat back four in his first competitive game against West Ham on Monday night. With Kurt Zouma still out with a knee injury and no new centre-back signed as yet, I think we’ll see four at the back again on Saturday.

Conte has very few options to mix things up so it looks like Gary Cahill will continue alongside John Terry in the middle of defence with Branislav Ivanovic and Cesar Azpilicueta keeping their places in the full-back positions.

Midfield: Cesc Fabregas was left out of the starting eleven against West Ham but I think we might see the Spaniard recalled on Saturday. Oscar is the man most likely to drop out with Nemanja Matic and N’Golo Kante keeping their places.

Attack: Eden Hazard was back to his best against the Hammers and he’ll be looking to continue that form in to this weekend. Willian should keep his place on the right wing while Diego Costa should feel fortunate he’s not suspended for this game after escaping a certain sending off last time out.

The likes of Pedro and summer signing Michy Batshuayi will be among the substitutes and offer Conte options from the bench. 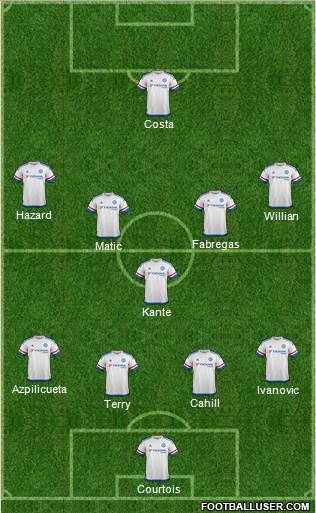