Liverpool will be looking to book their place in the third round when they take on Burton on Tuesday night. Here is the team we think Jurgen Klopp will select:

Liverpool will be looking to book their place in the third round when they take on Burton in the EFL Cup on Tuesday night.

Jurgen Klopp has confirmed he won’t make wholesale changes to his starting eleven but we still expect the Reds boss to mix things up. Here is the side we think he will select:

Goalkeeper: Loris Karius remains out with a hand injury and although Klopp may be tempted to give Alex Manninger a run out, I think Simon Mignolet will keep his place between the sticks.

Defence: Mamadou Sakho is back in training but isn’t expected to feature tomorrow night, however, I think we might see Joel Matip handed his debut after returning to fitness. The summer signing could line-up alongside Dejan Lovren with Ragnar Klavan given a breather.

Alberto Moreno was dropped for the loss at Burnley on Saturday but we should see him recalled in place of James Milner with Nathaniel Clyne keeping his place at right-back.

Midfield: Emre Can has recovered from a back injury and should be recalled against Burton with Gini Wijnaldum making way while Marko Grujic could be given another chance to impress in the middle of the park.

Jordan Henderson should retain his place but Lucas Leiva remains out through injury. Attack: Sadio Mane missed the Burnley game with a shoulder injury and he’s unlikely to be risked tomorrow but we could see Divock Origi come in for Daniel Sturridge up front as Klopp has suggested the striker needs game-time to improve his match sharpness.

Philippe Coutinho is expected to be given a rest but Roberto Firmino and Adam Lallana could keep their places in attack.

BACK  LIVERPOOL TO WIN AT CRAZY ODDS OF 4/1 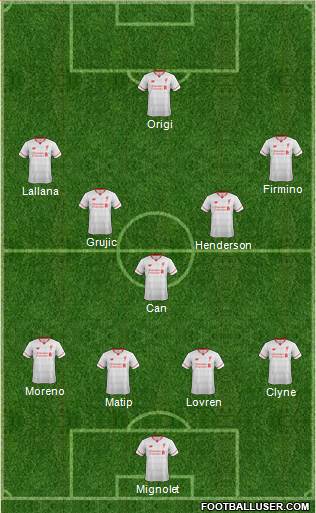