The draw for the third round of the EFL Cup was conducted on Wednesday night with Arsenal, Liverpool and Manchester United all getting tricky away ties.

The draw for the third round of the EFL Cup was conducted on Wednesday night and as usual it’s thrown up some intriguing ties.

Liverpool booked their place in the draw after thrashing Burton Albion on Tuesday night with summer signing Sadio Mane inspiring the Merseysiders to a comfortable 5-0 victory.

And Jurgen Klopp’s men have been rewarded with a tricky trip to Championship side Derby County in the next phase.

Chelsea also moved in to the third round stage but Antonio Conte’s side were made to work for it as Bristol Rovers pushed them all the way before eventually losing 3-2 at Stamford Bridge last night.

The Blues will now face Premier League champions Leicester City at the King Power in the third round.

Arsenal were one of the big guns who entered the competition at this stage and the north Londoners will face a tricky trip to Nottingham Forest.

Tottenham Hotspur have been handed a home draw with Mauricio Pochettino’s men set to host League One Gillingham at White Hart Lane.

Manchester United will also take on League One opposition as they face a trip to Northampton Town while holders Manchester City will take on Swansea City at the Liberty Stadium.

Accrington booked their place in the third round with a last gasp win over Burnley tonight and they will now take on West Ham at the Olympic Stadium.

The games will be played on the week commencing September 19th. 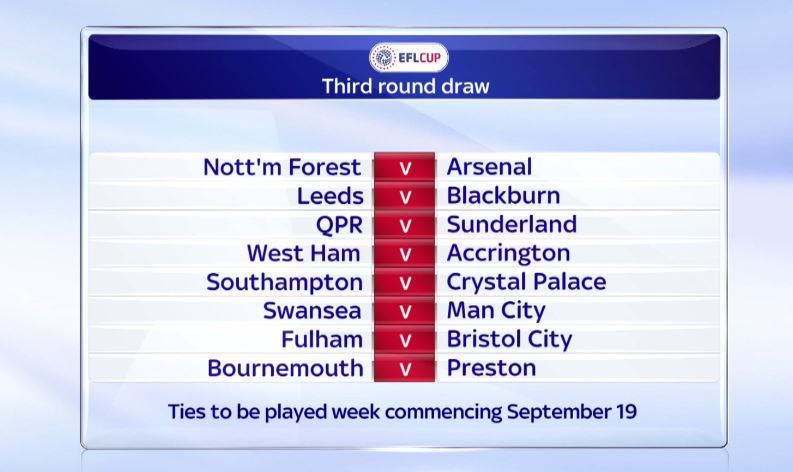 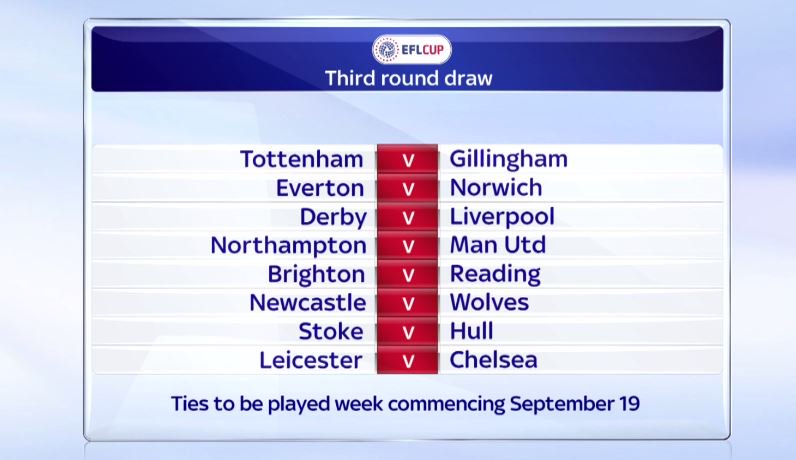