Champions League group stage draw: Arsenal, Tottenham and Leicester City will be confident of progressing but Manchester City have a tough job ahead of them.

The draw for the group stages of the Champions League has just been conducted and Arsenal, Tottenham and Leicester City will be confident of progressing but Manchester City have a tough job ahead of them.

Arsenal booked their place in the group stages draw following their second-placed finish in the Premier League last season and managed to delay their annual trip to Barcelona or Munich after drawing PSG from Pot 1.

The Gunners were then drawn to play Swiss champions FC Basel and Bulgarian side Ludogorets so Arsene Wenger should be relatively pleased with the north Londoners group.

Tottenham Hotspur are back in the big time after finishing third last year and Mauricio Pochettino’s men have also been handed a favourable draw having been drawn in Group E along with CSKA Moscow, Bayer Leverkusen and Monaco.

Manchester City needed to navigate a play-off after finishing fourth in the league but Pep Guardiola’s side eased in to the group stage draw with a comfortable 6-0 aggregate win over Steaua Bucharest.

Predictably, the new City boss has been drawn to face former side Barcelona, while they will also face Borussia Mönchengladbach and Celtic in Group C making it a very difficult task for the Manchester club.

Leicester City go in to the competition as Premier League champions so were therefore in Pot 1 meaning they avoided big-hitters such as Barcelona, Real Madrid and Bayern Munich.

Claudio Ranieri’s men will be very pleased with their group having been drawn in Group G along with Porto, Club Brugge and Copenhagen and Leicester should have a realistic chance of progressing to the knockout stages for the first time in their history. 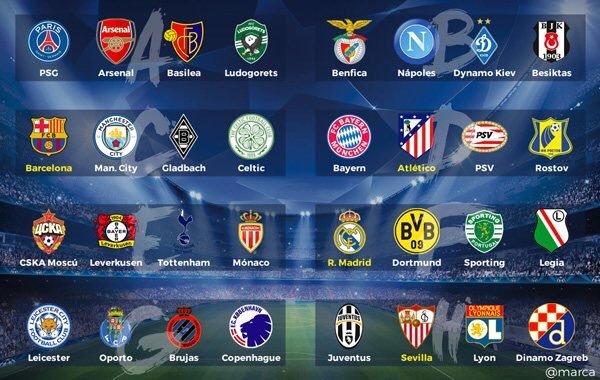