The German FA have confirmed Arsenal have sealed a £35m deal to sign an international defender. Find out all the details here.

The transfer window is now drawing to a close so we’ll bring you all the latest transfer rumours and gossip from around the globe. Today, the German FA have confirmed Shkodran Mustafi’s Arsenal move…

The German Football Association have confirmed Shkodran Mustafi has joined Arsenal in a £35m deal from Valencia before the move has been officially announced, according to the Evening Standard.

After weeks of negotiations with Valencia we finally found a breakthrough late last week with the Telegraph reporting on Thursday that we’d struck a deal worth up to £35m for the signing of Mustafi.

The newspaper claims that the 24-year-old flew-in to England on Friday and underwent his medical at London Colney after agreeing personal terms over a five-year contract with the club.

Arsene Wenger was then quoted as saying after our 3-1 win at Watford on Saturday that Mustafi and striker Lucas Perez were on the verge of joining the club with just paperwork left to be done before the double deal was announced.

However, it looks like either the German FA knows something we don’t or they’ve jumped the gun a little as they confirmed on their official website today that Mustafi has completed his move to Arsenal – despite there being no official confirmation from either club [as the time of writing].

A statement on their website is quoted as saying by the Evening Standard:

“Arsenal have increased their quota of German players with the transfer of world champion Shkrodan Mustafi from Valencia.”

You can also see a screenshot of the website here: 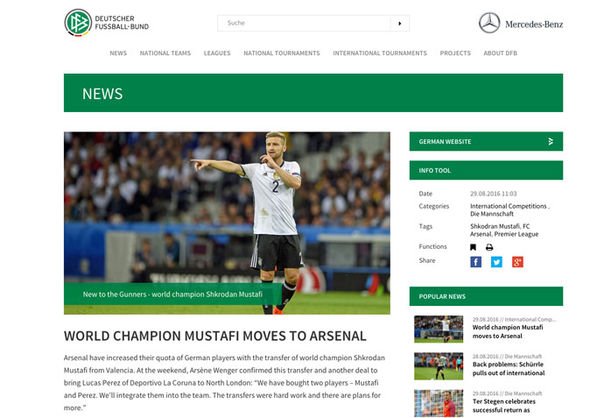 The news comes after Mustafi conducted an interview with Sky Sports Germany last night explaining that it was an easy decision to join Arsenal after hearing great things about the club from international team mate Mesut Ozil.

The centre-back also said that he has always ‘loved’ Arsenal and admires the way we play the game. He’s quoted as saying by Sky Sports:

“I did not see Per for a long time because he quit international football but I talked to Mesut,” Mustafi told Sky Sports in Germany.

“He told me everything I wanted to know. Everything was positive, so I was convinced very fast. It did not take much.

“I have always loved Arsenal, I like how they play here, it is not typical English.

“The game here is more like in Spain and with the German national team, keeping the ball on the grass, so it was easy to convince me.”

So this move is now virtually over the line and it’s expected to be officially announced on Tuesday with Mustafi becoming one of our most expensive ever signings.