Arsenal’s new signing has been tussling with Mesut Ozil in training ahead of our Premier League clash with Southampton on Saturday.

Arsenal’s new signings Shkodran Mustafi and Lucas Perez have been training with their new team mates ahead of our Premier League clash with Southampton on Saturday.

Mustafi made a big-money move from Valencia last month but has had to wait to link-up with his new team after immediately heading off on international duty with Germany.

The 24-year-old returned to London Colney today and took part in his first training session where he tussled with compatriot Mesut Ozil as he prepares to make his debut this weekend.

Fellow new signing Lucas Perez was also out on the training pitch this afternoon as he also gears up to make his bow against the south coast club on Saturday after making the move from Deportivo La Coruna.

Let’s hope the boys settle quickly as I think they both have the potential to be excellent signings for the club and I’m sure we should get our first glimpse of the pair against the Saints this weekend.

Alex Iwobi was also back in full training today after recovering from a thigh injury that he picked up during the opening weekend defeat to Liverpool so he could be in contention to make his comeback on Saturday.

Check out more photos from today’s session courtesy of Arsenal.com and the clubs official Getty account: 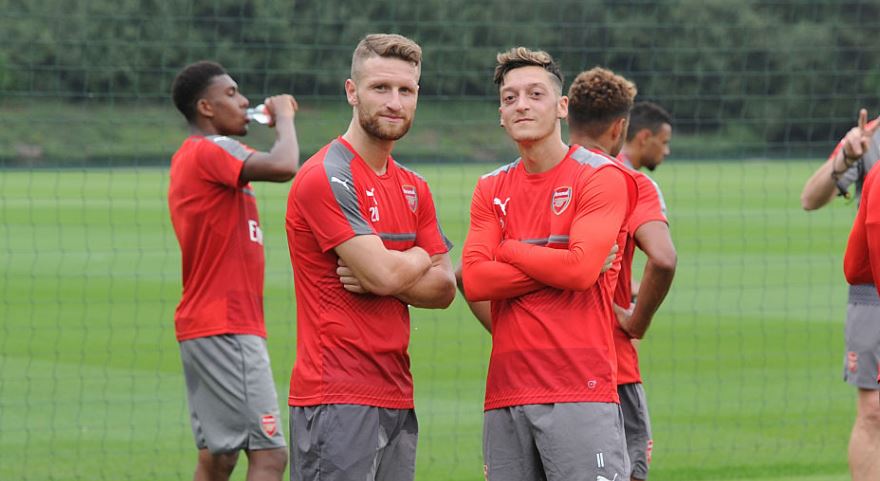