Manchester United entertain Zorya Luhansk at Old Trafford on Thursday evening. Here is the side I think Jose Mourinho will pick for the game:

Manchester United will be looking to kick start their Europa League campaign when they entertain Zorya Luhansk at Old Trafford on Thursday evening.

Goalkeeper: David de Gea will continue between the sticks and he’ll be looking to keep a clean sheet after conceding during the 4-1 win over Leicester on Saturday.

Defence: Mourinho is expected to name a strong line-up for the game as United look to bounce back from their opening round loss at Feyenoord but the Special One could make changes to the full-back positions.

Matteo Darmian could be given another chance to impress with Antonio Valencia given a rest while Marcos Rojo looks set to come back in at left-back having played in both cup games so far this season.

Daley Blind would therefore be given a rest while Luke Shaw has been ruled out through illness but I expect Eric Bailly and Chris Smalling to continue at the back together.

Midfield: Mourinho could hand Morgan Schneiderlin a recall after the Frenchman was left out of the squad at the weekend. Ander Herrera is likely to keep his place after another impressive outing against Leicester which would mean Marouane Fellaini and Michael Carrick having to make do with places on the bench.

Attack: Mourinho confirmed at his press conference today that Zlatan Ibrahimovic will start the game but Wayne Rooney is unlikely to be risked from the start as he continues to nurse a minor back complaint.

Antony Martial is back in contention after recovering from a calf/ankle injury that kept him out of the Leicester game but Marcus Rashford should keep his place on the left wing after finding the target once again at the weekend.

Paul Pogba could be moved in to a more advanced central role with Juan Mata moved out to the right wing. This would see Jesse Lingard drop out while Henrikh Mkhitaryan has been ruled out despite returning to full training. 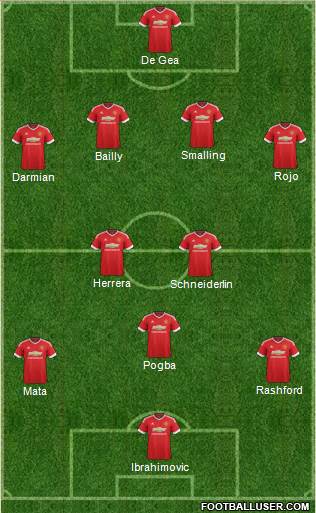