Arsenal Star Set For Swansea Return After Recovering From Injury

Arsenal have been handed an injury boost with an attacker set to return against Swansea later this month after returning to training on Monday. 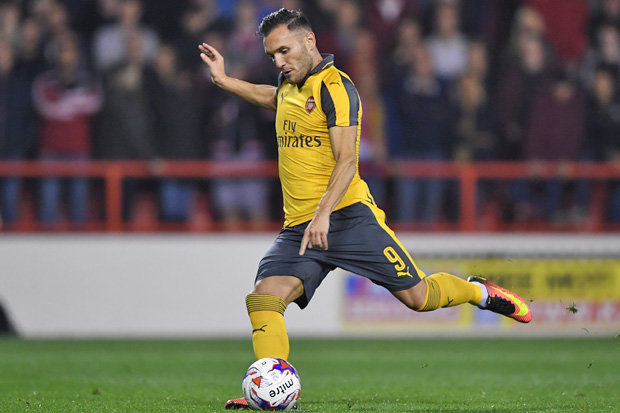 Arsenal striker Lucas Perez is set to return to the squad for the visit of Swansea City next weekend after making a swift recovery from a knee injury, according to the IBTimes.

Perez has made a slow start to life at the Emirates following his £17m move from Deportivo La Coruna just before the summer transfer deadline day with the striker making just two starts and one substitute appearance so far.

The 28-year-old has been consigned largely to the bench but he was a surprise absentee when the teams were announced prior to our clash with Burnley on Sunday afternoon.

With Arsene Wenger not using Perez against either Chelsea or Basel, some fans thought the boss had decided to leave the Spaniard out of his squad entirely at Turf Moor at the weekend.

However, Arsenal moved quickly to play down those rumours after revealing that Perez had been ruled out with a knee injury and the IBTimes have now confirmed that the striker ended Friday’s training session with a swollen knee and the clubs medical staff advised he should not be risked at Burnley.

With Olivier Giroud still out with a niggling toe injury and Danny Welbeck not expected back until 2017 following a serious knee injury, Perez’s absence left us short of attacking options on the bench on Sunday.

However, it looks like we’ve been handed a boost as the IBTimes claim that Perez resumed training on Monday and will be fit and available for selection when Swansea come to the Emirates after the international break later this month.

I don’t expect the Spaniard to start as Alexis Sanchez has been excelling in a central role lately but with games against Ludogorets, Middlesbrough and Reading coming up, Perez is likely to get more chances to impress over the coming weeks.