Arsene Wenger has confirmed a double injury blow ahead of Arsenal’s clash with Swansea but a midfielder is available again plus an update on Mesut Ozil. 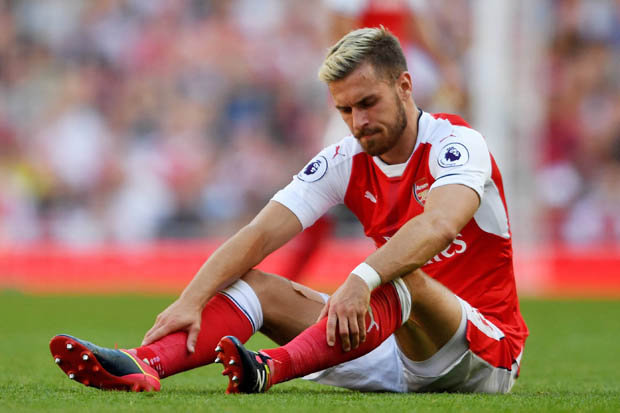 Premier League football returns from the international break this weekend and Arsenal will be looking to continue their excellent form when Swansea visit the Emirates on Saturday afternoon.

Unfortunately, Wenger confirmed that Aaron Ramsey has once again been ruled out as the midfielder continues to recover from a hamstring injury that’s plagued him since the opening weekend of the season.

Ramsey limped out of our defeat to Liverpool in mid-August and has suffered a number of minor setbacks in training over the course of the last two months which have delayed his comeback.

The Welsh international is now undergoing a pre-season training regime in order to get him back to full fitness which means he’s also expected to miss Wednesday’s Champions League clash with Ludogorets and next weekends league game with Middlesbrough.

In a double blow, the boss also confirmed that Olivier Giroud remains sidelined by a niggling toe injury that he suffered during the closing stages of our draw at Paris Saint-Germain last month.

Like Ramsey, Giroud is now looking to build up his fitness again in training but is also expected to miss at least another two games as well as Saturday’s clash with Swansea.

However, there was some positive news as Wenger revealed that Francis Coquelin is available again after overcoming a knee injury that he suffered during the 3-0 victory over Chelsea at the Emirates three weeks ago.

Carl Jenkinson is also set to make his comeback by playing for the Under-21’s tonight after recovering from a long-term knee injury that he sustained way back in February.

Wenger is quoted as saying by the Daily Star:

“Giroud will not be available and Aaron Ramsey neither. Next week will come too early.

“We have decided that we will give him a complete pre-season now, even if he misses more games.

“And Giroud? He will be the same. We have to build his fitness up again.

“Coquelin is back and available. We had quite good news with the players coming back from international duty.

“Jenkinson? He will be back tonight playing with the Under-23s. He is available to compete for places.”

It’s a big blow to have Ramsey and Giroud unavailable as they would have further strengthened our squad over the next three games but thankfully Coquelin is back in contention – although it’s going to be interesting to see if he regains his place as Granit Xhaka has been in great form in his absence.

The final bit of team news was an update on Mesut Ozil and Wenger confirmed that the playmaker has informed Arsenal’s medical staff he’s fit and available for selection this weekend.

Ozil sparked fears he’d picked up a knock after being replaced at half-time during Germany’s 2-0 win over Northern Ireland earlier this week but thankfully the substitution wasn’t injury-related so he’s fit to face the Swans on Saturday.