Liverpool take on fierce rivals Manchester United at Anfield on Monday night. Here is the side I think Jurgen Klopp will select for the game:

Liverpool will be looking to extend their five-game winning streak when they take on fierce rivals Manchester United at Anfield on Monday night.

Goalkeeper: Loris Karius is expected to keep his place ahead of Simon Mignolet having started the last two Premier League games.

Defence: Dejan Lovren is expected to be passed fit after shacking off a groin/back injury that kept him out of the Croatia squad during the recent international break so he’s set to partner Joel Matip at the back.

Nathaniel Clyne is also likely to feature after returning to training following a knee injury that kept him out of England duty while James Milner should continue at left-back ahead of Alberto Moreno.

Midfield: However, Klopp is going to be forced in to some changes in midfield with Adam Lallana a major doubt due to a groin strain that he picked up against Swansea before the international break so Emre Can is set to come in to the side.

Georginio Wijnaldum is also expected to miss out after limping off during Holland’s defeat to France last week with a hamstring injury so Philippe Coutinho may drop back in to a deeper midfield role.

Attack: With Coutinho switching position, Klopp is likely to push Roberto Firmino out to the wing with Daniel Sturridge coming in to lead the line up front. Sadio Mane is certain to keep his place and will be looking to continue his good form on the right wing. 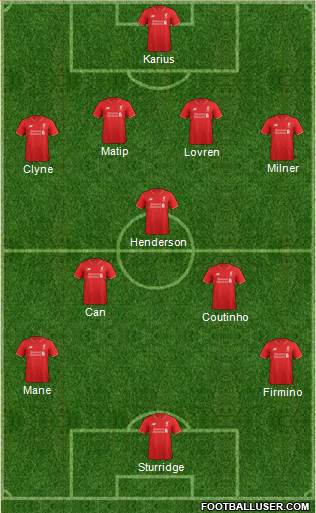