Tottenham take on Bayer Leverkusen in Germany on Tuesday night. Here is the side we think Mauricio Pochettino will select for the game:

Tottenham will be looking to take a huge step towards qualification to the knockout stages of the Champions League when they take on Bayer Leverkusen in Germany on Tuesday night.

Goalkeeper: Hugo Lloris is almost certain to continue between the sticks tomorrow night.

Defence: Spurs will be without influential centre-back Toby Alderweireld after he was stretchered off during Saturday’s 1-1 draw with West Brom with a knee injury. Pochettino is hopeful the injury isn’t too serious but the club are waiting on scan results before they’ll know the full extent of the problem.

Eric Dier could be given the nod to start alongside Jan Vertonghen as he’s seemingly lost his place in midfield while Danny Rose is expected to get a recall after being rested at the weekend. Kyle Walker should continue at right-back.

Attack: Harry Kane remains out with an ankle injury but Christian Eriksen and Erik Lamela are likely to continue on the wings. Hueng-min Son is expected to come in up front after being rested against West Brom meaning Vincent Janssen will drop to the bench.

BACK SPURS TO BEAT LEVERKUSEN AT CRAZY ODDS OF 12/1 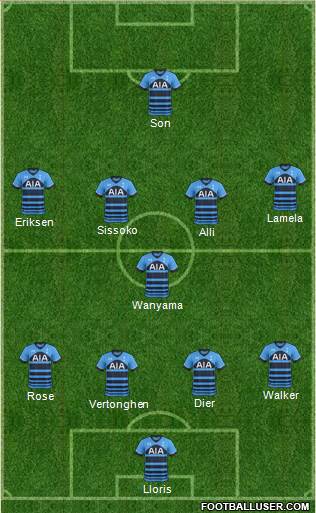