Two Manchester United players have joined Chelsea star David Luiz in the WhoScored? Premier League team of the week for matchday 8 of the new season.

Two Manchester United players have joined Chelsea star David Luiz in the WhoScored? Premier League team of the week for matchday 8 of the new season.

United and Liverpool played out a disappointing 0-0 draw at Anfield on Monday night with Jose Mourinho proving once again he can grind out an important point when his back is seemingly against the wall.

Antonio Valencia put in another solid shift at right-back with the Ecuadorian international pulling off one of the tackles of the season to prevent Liverpool’s Roberto Firmino a goal-scoring opportunity and his score of 8.41 was enough to book his place in the Team of the Week.

Ander Herrera has found a new lease of life under Mourinho and the Spaniard continued his excellent form with another superb performance in the middle of the park at Anfield to also earn a place in the TOTW.

Chelsea raised a few eyebrows when they re-signed David Luiz from Paris Saint-Germain on transfer deadline day last month but the Brazilian proved his worth with a solid display during the Blues 3-0 victory over Leicester on Saturday with his score of 8.26 enough to see him named in the TOTW back four.

Mark Stekelenburg also makes the cut after producing a string of excellent saves – including two from the penalty spot – to earn Everton a point at Manchester City while David Silva earned a place after another impressive outing for Pep Guardiola’s side. 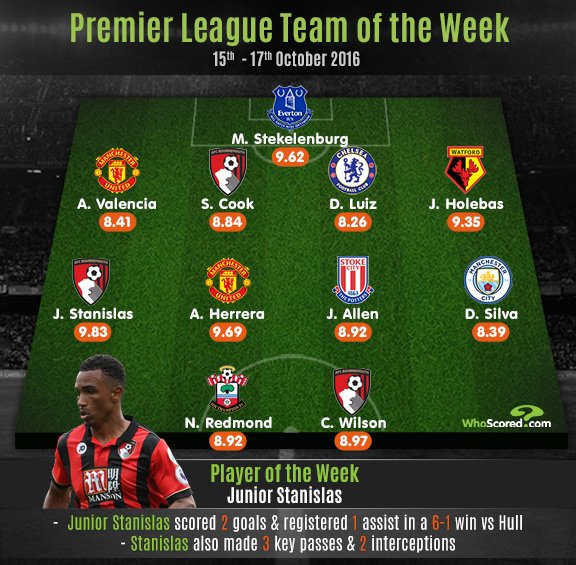