Arsenal take on Middlesbrough at the Emirates on Saturday afternoon. Here is the side Gooner Mac thinks Arsene Wenger will select for the game:

Arsenal will be looking to keep the pressure on at the top of the table when they take on Middlesbrough at the Emirates on Saturday afternoon. Here is the side Gooner Mac thinks Arsene Wenger will select for the game:

Goalkeeper: Petr Cech was left out once again in the Champions League but is expected to be recalled this weekend despite David Ospina putting in a solid display.

Defence: Nacho Monreal was rested for the 6-0 win over Ludogorets on Wednesday night but the Spaniard should come back in to the side on Saturday meaning Kieran Gibbs will drop back to the bench.

Shkodran Mustafi is set to continue alongside Laurent Koscielny with the pair forging an excellent partnership in the middle of defence while Hector Bellerin should keep his place at right-back.

Midfield: Granit Xhaka begins a three-match domestic ban so Francis Coquelin is expected to start in the middle of the park as Aaron Ramsey looks likely to miss out as he’s still not back to full fitness following a hamstring injury that’s kept him out since the first game of the season.

Santi Cazorla came off with an achilles knock last night so he may need to be assessed but his withdrawal was more of a precaution so I expect him to start on Saturday before being rested in the League Cup next week.

Attack: Olivier Giroud is pushing for a return to the squad but the Frenchman will have to wait for his chance to start as Alexis Sanchez has excelled up front during his absence and I expect the Chilean to keep his place through the middle on Saturday.

Theo Walcott continued his fine form with another strike against Ludogorets while Mesut Ozil bagged a superb hat-trick so they will keep their places in attack. It will be interesting to see whether Wenger recalls Alex Iwobi after Alex Oxlade-Chamberlain put in a goal-scoring display in Europe but I think Iwobi may get the nod. 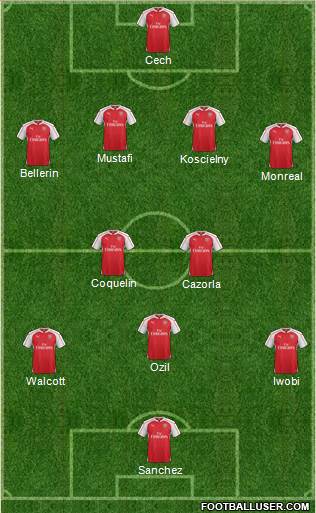