Arsenal take on Reading at the Emirates in the EFL Cup this evening. Here is a preview with team news, line-up and predicted score.

Arsenal will look to get back to winning ways when we entertain Reading at the Emirates Stadium this evening in the fourth round of the EFL Cup.

We saw our seven-game winning streak come to an end with a hugely frustrating 0-0 draw at home to Middlesbrough on Saturday but with other teams also dropping points, we remain level with Manchester City at the top of the table.

The League Cup is obviously not our main priority this season, particularly with the title race once again looking so open, but a win tonight would put us through to the last eight and a final at Wembley becomes in reach.

With Liverpool, Tottenham, Man Utd, Man City, Chelsea and West Ham all playing each other, three of the favourites are going to exit the competition so Arsene Wenger could see this as a great opportunity to win the League Cup for the first time in his 20-year career in north London.

The boss will make wholesale changes to his starting eleven and he’s already named nine players who will feature against Reading.

Kieran Gibbs will captain the side at left-back while Gabriel and Rob Holding will also come in to the defence along with Carl Jenkinson – who makes his return from a long-term knee injury.

Wenger has confirmed that Alex Iwobi, Alex Oxlade-Chamberlain and Lucas Perez will all play while youngster Jeff Reine-Adelaide will get a chance to impress.

Olivier Giroud will also return to the squad after overcoming a toe injury but it remains to be seen whether he’ll start after six weeks on the sidelines.

Santi Cazorla has been ruled out with an achilles injury while Granit Xhaka serves the second of his two-game ban. Aaron Ramsey is back in full training but this game comes too soon for the Welsh international so he remains unavailable along with Per Mertesacker and Danny Welbeck.

Ainsley Maitland-Niles could get a run-out in midfield while Emi Martinez is likely to start in goal after playing in the previous round against Nottingham Forest.

As for Reading, they fielded a weakened side in the previous round and manager Jaap Stam could do so once again as he looks to focus on their promotion push from the Championship. 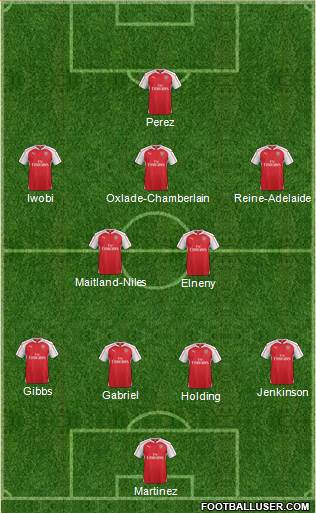 Arsenal 2-0 Reading: The last time we met Reading in the League Cup back in 2012 it was an absolute belter as we came from 4-0 down to win 7-5 in extra time and we’ve won all 13 of our previous meetings with the Royals. I don’t expect this to be another 12-goal thriller but I do think we’ll have enough to book our place in the quarter finals.

Arsenal are the 1/4 favourites to win the game but we can get you enhanced odds of 4/1 – just click here to take advantage of these crazy odds. Here are some other bets I like the look of if you want even more value: