The WhoScored Premier League Team of the Week has been unveiled and players from Arsenal, Liverpool and Tottenham Hotspur all feature.

The WhoScored Premier League Team of the Week has been unveiled and players from Arsenal, Liverpool and Tottenham Hotspur all feature.

Arsenal maintained their excellent recent run of form with a resounding 4-1 victory over Sunderland with Alexis Sanchez helping himself to a brace at the Stadium of Light.

The Chilean international opened the scoring with a fine header before wrapping up the win with a late fourth and his score of 9.37 is enough to see him named in the TOTW.

Sanchez is joined by teammate Kieran Gibbs, who put in an excellent shift at left-back for the Gunners in the absence of Nacho Monreal to earn himself a score of 8.72.

It was another impressive weekend for Liverpool as they beat Crystal Palace 4-2 in a thriller at Selhurst Park with Philippe Coutinho once again central to the Merseysiders attacking play and he’s been named in the TOTW.

Tottenham were held to a frustrating 1-1 draw by Leicester City at White Hart Lane but Kyle Walker did enough to earn a score of 8.00 and a place in the Team of the Week.

Chelsea defender Cesar Azpilicueta also makes the cut after impressing during the Blues 2-0 win at Southampton on Sunday while Manchester City duo Ilkay Gundogan and Sergio Aguero are also named in the side after both scoring twice at the weekend.

Here is the full line-up: 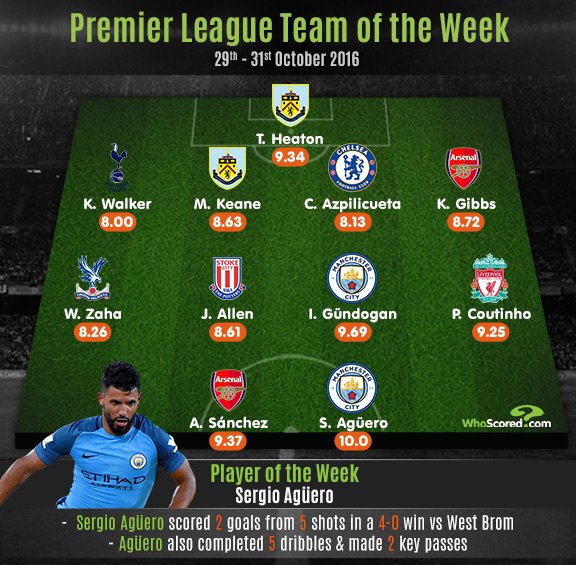