Man Utd take on Swansea City at the Liberty Stadium on Sunday afternoon. Here is the team I think Jose Mourinho will pick for the game:

Manchester United will be looking to get their season back on track when they take on Swansea City at the Liberty Stadium on Sunday afternoon.

Defence: Mourinho has limited options to rotate at the back as Chris Smalling continues to be a doubt for the trip to Wales after missing the last four matches with a foot injury while Eric Bailly is also out with a long term knee injury.

Antonio Valencia is facing an extended spell on the treatment table after suffering a fractured arm so Matteo Darmian is set to start at right-back while Luke Shaw will continue at left-back. Marcos Rojo has started alongside Daley Blind for the last two matches so he could keep his place on Sunday – although Phil Jones is back in the reckoning after recovering from a knee problem.

Midfield: Ander Herrera is suspended after being sent off against Burnley last weekend so Michael Carrick is expected to come in to the side after being rested for Thursday night’s disappointing Europa League defeat at Fenerbahce.

Paul Pogba is a doubt after limping out of the game in Turkey but the good news is was only a dead leg so the Frenchman may be able to recover in time to start against the Swans.

Attack: Zlatan Ibrahimovic is set for a recall to the starting eleven after being left out against Fenerbahce which could result in Wayne Rooney dropping back to the bench despite scoring a superb goal last night.

Anthony Martial may keep his place on the left wing with Marcus Rashford moving to the right and Juan Mata coming back in to the attacking midfield role.

Mourinho has told Henrikh Mkhitaryan he needs to do more to force his way in to his first team plans so I expect a place on the bench is the best he can hope for this weekend. 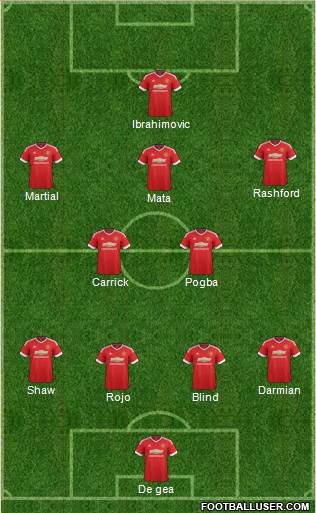