Liverpool take on Southampton at St Mary’s on Saturday afternoon. Here is the side I think Jurgen Klopp will select for the game:

Liverpool get back to Premier League action after the international break when they take on Southampton at St Mary’s on Saturday afternoon. Here is the side I think Jurgen Klopp will select for the game:

Goalkeeper: Loris Karius has ousted Simon Mignolet from the No.1 shirt so we expect the German to keep his place this weekend.

Defence: Klopp has no fresh injury worries to contend with at the back so we should see what has become a familiar looking defence once again line-up at St Mary’s.

James Milner has established himself as Liverpool’s first choice left-back ahead of Alberto Moreno so he should keep his place along with Joel Matip, Dejan Lovren and Nathaniel Clyne.

Midfield: Adam Lallana is a major doubt for the game after being forced off during the first half of England’s 2-2 draw with Spain on Tuesday night with a groin injury. Klopp says the injury isn’t thought to be too serious but I think it’ll be enough to see him miss the trip to the South Coast to face his former side.

That means that Emre Can should join Georginio Wijnaldum and captain Jordan Henderson in the three-man midfield this weekend.

Attack: Philippe Coutinho and Roberto Firmino arrived back on Merseyside on Wednesday night after the club paid for a private jet to get the Brazilian international back early from their trip to South America.

The pair will be assessed at Melwood on Friday but there is no reason to think they wont be fit to start along with Sadio Mane on Saturday. Therefore, Daniel Sturridge may have to make do with a place on the bench. 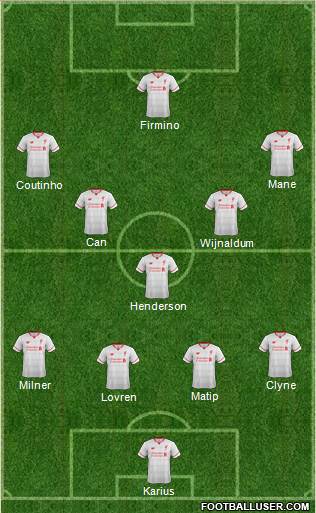