Chelsea take on Middlesbrough at the Riverside Stadium on Sunday lunchtime. Here is the team we think Antonio Conte will pick for the game:

Chelsea get back to Premier League action after the international break when they take on Middlesbrough at the Riverside Stadium on Sunday lunchtime.

Defence: John Terry has been dropped to the bench in recent weeks with Conte seemingly preferring Gary Cahill and Cesar Azpilicueta alongside David Luiz in his new-look back-three so I expect the skipper to continue on the sidelines.

Kurt Zouma has been edging closer to making his comeback in recent weeks after recovering from a serious knee injury but Conte wants the youngster to gain more match fitness with the under-21’s before he makes a return to the first team.

Midfield: Cesc Fabregas is back in contention after recovering from a thigh injury that’s hampered him in recent weeks but I suspect the Spaniard will have to make do with a place on the bench this weekend with Nemanja Matic starting alongside N’Golo Kante once again.

Attack: Pedro appears to have played his way in to Conte’s starting eleven with some excellent displays lately so the Spaniard should keep his place ahead of Willian in attack this weekend.

Conte confirmed a huge double injury boost at his press conference earlier as Eden Hazard has been passed fit after suffering an injury scare while away with the Belgian squad earlier this week while Diego Costa is also available after overcoming a minor groin strain which kept him out of Spain duty during the international break.

BACK CHELSEA TO BEAT BORO AT ENHANCED ODDS OF 5/1 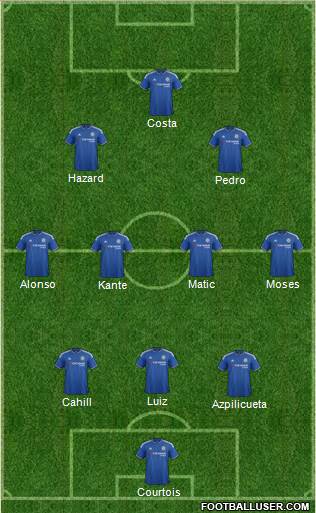