Some of the players have been reacting on social media after Manchester United and Arsenal played out a 1-1 draw at Old Trafford this afternoon. 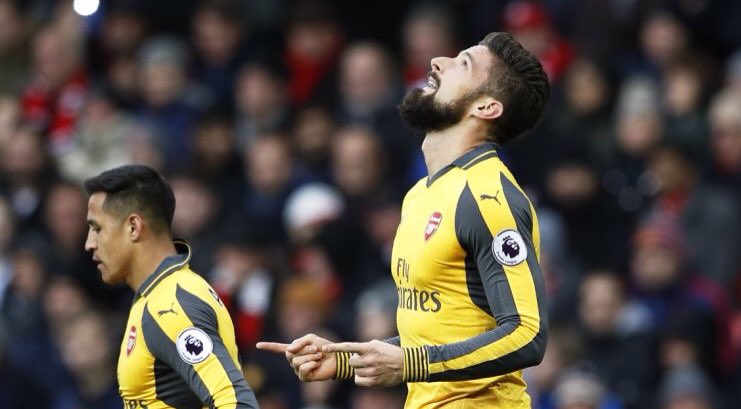 Some of the players have been reacting on social media after Manchester United and Arsenal played out a 1-1 draw at Old Trafford this afternoon.

After a relatively even opening forty-five minutes, Juan Mata opened the scoring for United midway through the second half as he swept home in to the bottom corner after being set-up by Ander Herrera.

The hosts couldn’t find the killer second goal and were made to pay as the Gunners rescued a point with substitute Olivier Giroud heading home a late equaliser from an excellent Alex Oxlade-Chamberlain cross.

The result leaves the Red Devils sitting sixth in the Premier League table and six points adrift of fourth-placed Arsenal, who in turn are two points off leaders Liverpool.

After the game, some of the United players have voiced their frustration at letting to points slip at home today with Juan Mata, Antonio Valencia, Michael Carrick and Ander Herrera all posting messages on Twitter.

Many of the Arsenal players have also taken to social media sites to upload photos and messages after securing a fortunate late point at Old Trafford to extent their unbeaten run to 17 matches in all competitions.

Check out what the players have been saying here:

We did everything to win but luck is not with us at the moment , we will keep trying and fighting, thanks old Trafford pic.twitter.com/86Ld9bNOZa

So frustrating. Feel we deserved more from today. Can't be too down after the way we played. Onwards and upwards! #WeGoAgainpic.twitter.com/BRnX6Efe50

We regret not having obtained the 3 points. I also want to dedicate this award to the entire Manchester United Medical Corps. pic.twitter.com/ehuBsU5JlQ

A very frustrating outcome… but we remain positive after the way we played. Atmosphere at Old Trafford incredible once again! @ManUtd pic.twitter.com/P082fTNYZA

Not the result or performance we wanted, but we keep our unbeaten run going with a good come back and point in the end. #COYG pic.twitter.com/x3h303kIuT

Tough match but you know we don't give up until the end! #MUFCvAFC #AFC #Gunners #sm20 #magista @Arsenal pic.twitter.com/3ESXUhB7ZO

Lucky punch! Not our best performance this season but a crucial point for us! #MUFCvAFC #COYG #OldTrafford @arsenal @premierleague pic.twitter.com/mxcW6EbC90

Not at our best today but it's good to take the positives. Great character shown from the lads to fight back from behind On to Wednesday. #afc #coyg

An important point for us. @arsenal