Tottenham take on Monaco in the Champions League this evening. Here is a preview with team news, line-ups, betting tips and predicted score.

Tottenham Hotspur will look to keep alive their hopes of qualifying for the knockout stages of the Champions League when they take on Monaco at the Stade Louis II on Tuesday night.

Spurs currently sit third in Group E having taken just four points from their four games so far with a 1-0 defeat to Bayer Leverkusen at Wembley three weeks ago leaving the north Londoners with a mountain to climb in order to book their place in the last 16.

If second-placed Bayer beat CSKA Moscow in Russia in tonight’s other group game, then Tottenham know they will have to secure all three points at Monaco in order to keep their hopes of qualification alive.

Mauricio Pochettino’s men should be in high spirits after scoring twice late on to beat West Ham 3-2 on Saturday evening, which saw Spurs close the gap on fourth-placed Arsenal to just one point while leaders Liverpool are just a further three points ahead.

Pochettino will make a late decision over whether to start Harry Kane as the Spurs boss is mindful not to push the striker too hard as he only recently returned from a lengthy injury absence.

The Argentinean coach has confirmed he’ll also hand late fitness tests to Dele Alli and Mousa Dembele as he looks to protect some of his players who aren’t yet 100% match fit.

However, Toby Alderweireld is certain to miss out as he continues to nurse a knee injury that’s kept him out for six weeks while Erik Lamela and Ben Davies are also on the sidelines.

Kyle Walker could get a rest with Keiran Trippier starting at right-back as Pochettino usually likes to swap at least one of his full-backs in the cup games while Harry Winks could miss out despite his excellent display against the Hammers at the weekend.

BACK SPURS TO BEAT MONACO AT CRAZY ODDS OF 10/1 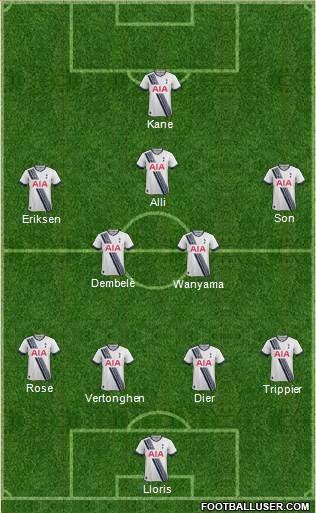 Monaco 1-1 Tottenham: Spurs may be unbeaten in the Premier League but they have struggled in Europe so far with just one win from their four games. They desperately need a win tonight but Monaco have a superb record at home, as they’ve not lost a Champions League group stage match at the Stade Louis II since losing to Rangers back in 2000, so I think a draw is probably the best Tottenham can hope for.

The bookmakers are struggling to separate the two teams but we can get you enhanced odds of 10/1 on Spurs if you fancy the north Londoners tonight – just click here to take advantage of these crazy odds. Here are some other bets I like the look of: 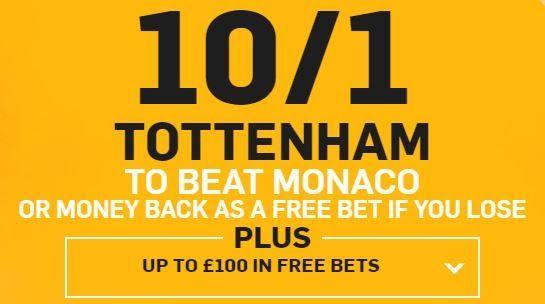