Manchester United take on Feyenoord in the Europa League at Old Trafford on Thursday night. Here is the team I think Jose Mourinho will pick for the game:

Manchester United will be looking to give their hopes of qualifying for the knockout stages of the Europa League a major boost when they take on Feyenoord at Old Trafford on Thursday night.

Goalkeeper: David de Gea is certain to keep his place between the sticks.

Defence: Chris Smalling is still unable to return to full training as he continues to nurse a toe injury that’s hampered him in recent weeks so the England international will once again miss out tomorrow night.

Phil Jones has impressed in the middle of defence and put in another encouraging performance against Arsenal at the weekend so he should keep his place alongside Marcos Rojo at the back with Eric Bailly still nursing a knee injury.

Antonio Valencia made a successful return from a fractured arm at the weekend so he should continue at right-back while Luke Shaw could get a recall on the left side of defence with Matteo Darmian dropping out.

Midfield: Michael Carrick was once again excellent against the Gunners last time out but he’s unlikely to feature as Mourinho may hold him back for Sunday’s clash with West Ham. Therefore, Paul Pogba could drop back in to a deeper role alongside Ander Herrera against Feyenoord.

Attack: Zlatan Ibrahimovic is set for a recall after missing the Arsenal game through suspension meaning Marcus Rashford could move to the wing after impressing when he played out wide at the weekend.

Wayne Rooney could also come back in to the side if Mourinho wants to mix things up in attack with Anthony Martial likely to make way following a disappointing performance at Old Trafford on Saturday.

Mourinho has already confirmed that Henrikh Mkhitaryan will feature in the game with the Armenian international finally about to get his chance having not played for the first team in over two months. 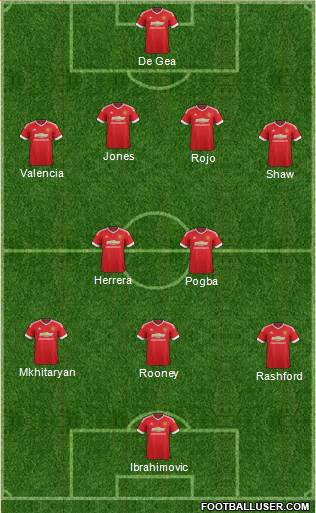