Will Conte Make Changes To His 3-4-3? Predicted Chelsea XI To Face Tottenham

Chelsea take on Tottenham at Stamford Bridge on Saturday evening. Here is the team we think Antonio Conte will pick for the game:

Defence: Chelsea have no fresh injury worries to contend with in defence so Conte is expected to stick with his settled back three of Cesar Azpilicueta, David Luiz and Gary Cahill.

That means John Terry will once again have to make-do with a place among the substitutes while Kurt Zouma could be pushing for a place in the squad after enjoying another run-out with the under-23’s on Monday – although I doubt the Frenchman will be ready to start for the first team just yet.

Midfield: Cesc Fabregas was an unused substitute against Middlesbrough last weekend after recovering from injury so the Spaniard will be hoping for some action on Saturday. However, I can’t see Conte splitting up Nemanja Matic and N’Golo Kante so the former Arsenal playmaker will have to make-do with a place on the bench once again.

Victor Moses has established himself on the right wing so he should keep his place in the team while Marcos Alonso should once again start on the left.

Attack: Pedro has played his way in to Conte’s starting eleven on a regular basis recently and I think the Spaniard will keep his place in attack ahead of Willian this weekend.

Eden Hazard is certain to start as long as he doesn’t pick up any injury before Saturday evening and the Belgian ace will support in-form striker Diego Costa – who scored his 10th goal of the season at the Riverside last weekend. 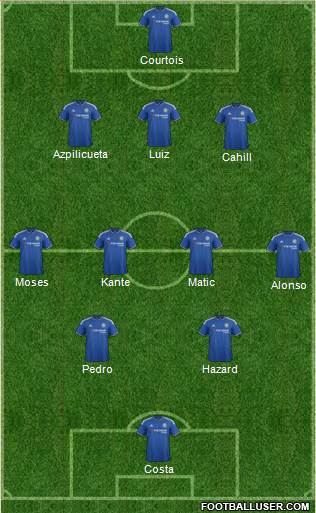 BACK CHELSEA TO BEAT SPURS AT ENHANCED ODDS OF 6/1