Manchester United take on West Ham at Old Trafford on Sunday afternoon. Here is the team I think Jose Mourinho will pick for the game:

Manchester United will be looking to build on their Europa League win last night when they take on West Ham at Old Trafford on Sunday afternoon.

Goalkeeper: David de Gea was rested for last night’s Europa League win over Feyenoord so Sergio Romero is expected to make way for the Spanish number on this weekend.

Defence: Chris Smalling is expected to once again miss out with an on-going toe injury while Eric Bailly is also out with a knee problem so Phil Jones should continue at centre-back following another solid display in midweek.

Daley Blind came in against Feyenoord but I think we might see Marcos Rojo recalled in at centre-back with Luke Shaw keeping his place at left-back and Antonio Valencia once again on the right side of defence.

Midfield: Michael Carrick has played two games in succession so we may see the 35-year-old given a breather against his former club with Ander Herrera coming back in to start alongside Paul Pogba after being rested last time out.

Attack: Wayne Rooney could have played his way back in to Mourinho’s starting eleven after an excellent performance against Feyenoord that saw him score and grab an assist during the 4-0 victory.

Henrikh Mkhitaryan also stood out upon his return to the starting eleven, however, given it was his first game in over two months, I think it would be a big ask for him to start again on Sunday.

Therefore, we could see Marcus Rashford come back in to the side and support Zlatan Ibrahimovic in attack. 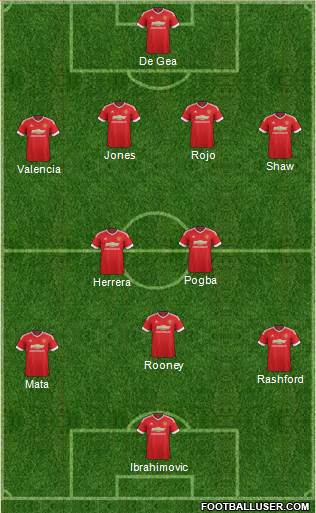