Players from Arsenal, Liverpool and Tottenham Hotpsur have been named in the WhoScored? Premier League Team of the Week.

Players from Arsenal, Liverpool and Tottenham Hotpsur have been named in the WhoScored? Premier League Team of the Week.

Arsenal bounced back from their League Cup disappointment with a five-star performance against West Ham as Arsene Wenger’s men blew the Hammers away 5-1 at the London Stadium on Saturday evening.

Alexis Sanchez was the star man as he scored a stunning hat-trick so it’s no surprise that the Chilean international is not only included in the TOTW but he’s also been named as the Player of the Week after being given a perfect score of 10.

Alex Oxlade-Chamberlain was also back to his best against West Ham, chipping in with a goal and an assist to also earn a rating of 10 while team mate Mesut Ozil is in the TOTW thanks to his score of 8.56.

Arsenal’s north London rivals Tottenham also scored five this weekend as they thrashed Swansea at White Hart Lane with Christian Eriksen getting himself on the score-sheet to earn a 10/10 rating and a place in the Team of the Week.

Harry Kane continued his excellent form since returning from injury with a double against the Swans so it’s no surprise to see him leading the line alongside Sanchez up front.

Liverpool may have seen their title charge dented after throwing away a two-goal lead to lose 4-3 at Bournemouth on Sunday but Emre Can’s goal-scoring display has done enough to see him make the cut.

Check out the full WhoScored? Team of the Week here: 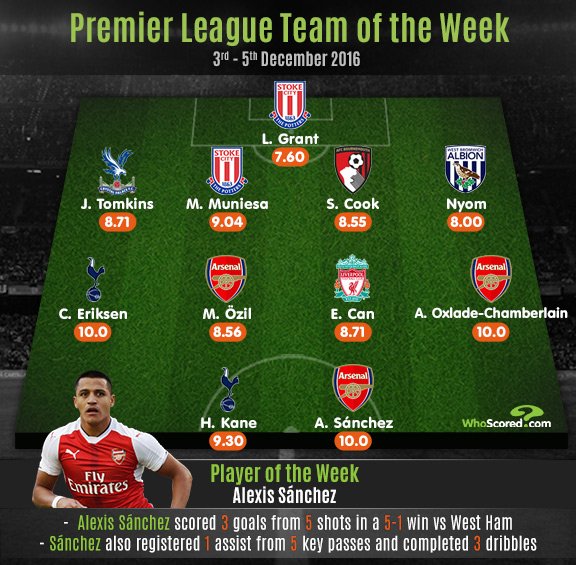