Manchester United take on Zorya Luhansk at the Chornomorets Stadium on Thursday evening. Here is the team I think Jose Mourinho will pick for the game:

Manchester United will be looking to book their place in the knockout stages of the Europa League when they take on Zorya Luhansk at the Chornomorets Stadium on Thursday evening.

Goalkeeper: United only need to avoid defeat tomorrow night to guarantee their place in the knockout stages so Mourinho may decide to give No.1 David de Gea a rest and start Sergio Romero between the sticks.

Defence: Luke Shaw has been ruled out of the game after failing to recover from the knock that kept him out of the Everton match while Matteo Darmian has been left back in Manchester so Daley Blind should start at left-back.

Antonio Valencia has also not travelled to Ukraine so Timothy Fosu-Mensah could be given a rare run-out at right-back while Phil Jones and Marcos Rojo could keep their places after some impressive displays lately.

Chris Smalling remains out and although Eric Bailly returned to the squad against Everton last weekend, I don’t think Mourinho will want to test his knee for the first time on the rock hard Zorya pitch.

Midfield: Michael Carrick is another player who’s been left back in Manchester to rest ahead of Sunday’s clash with Tottenham so we could see Paul Pogba lining-up alongside Ander Herrera in midfield.

Marouane Fellaini is pushing for a start but I can’t see the Belgian international being called up after giving away a late penalty to throw away two valuable points at Everton last time out so he’ll have to make do with a place on the bench.

Attack: Wayne Rooney is expected to come back in to the side after missing the trip to Goodison Park last weekend through suspension but Henrikh Mkhitaryan could keep his place in attack after impressing in recent weeks.

Anthony Martial could make way with Marcus Rashford getting a recall on the left side of attack but Zlatan Ibrahimovic should once again lead the line up front. 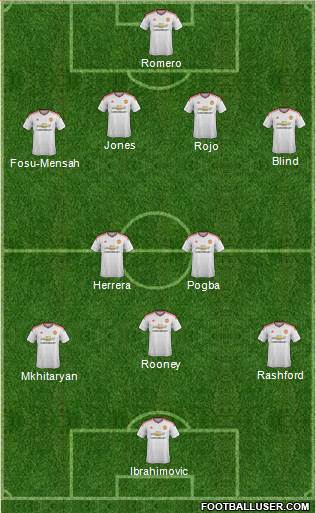