Liverpool take on West Ham at Anfield on Sunday afternoon. Here is the side I think Jurgen Klopp will select for the game:

Liverpool will be looking to get back to winning ways following last weeks disappointment at Bournemouth when they take on West Ham at Anfield on Sunday afternoon. Here is the side I think Jurgen Klopp will select for the game:

Goalkeeper: Loris Karius was at fault for Bournemouth’s late winner during the 4-3 defeat last weekend but Klopp backed his No.1 at his press conference today so I expect the German to keep his place on Sunday.

Defence: Liverpool have been handed a major injury boost with the news that Joel Matip is available again after recovering from a minor ankle injury that kept him out of the trip to the south coast last weekend.

The Cameroon international is expected to come straight back in to the starting eleven with Lucas Leiva dropping out after filling in at the back last time out. Dejan Lovren will continue in defence along with James Milner and Nathaniel Clyne.

Midfield: Adam Lallana is also pushing for a recall after making his return from a groin injury off the bench against Bournemouth. Lallana was a firm favourite under Klopp before his injury so I expect him to start on Sunday with Gini Wijnaldum the man most likely to make way.

Emre Can scored a superb goal last week so he should keep his place in midfield while Jordan Henderson is certain to skipper the side once again on Sunday.

Attack: Philippe Coutinho remains out with an ankle injury while Daniel Sturridge has also been ruled out of the game against West Ham after only returning to light training today following three weeks on the sidelines.

Roberto Firmino will therefore continue on the left side of attack with Sadio Mane on the right and Divock Origi is expected to lead the line up front having scored three goals in his last three games. 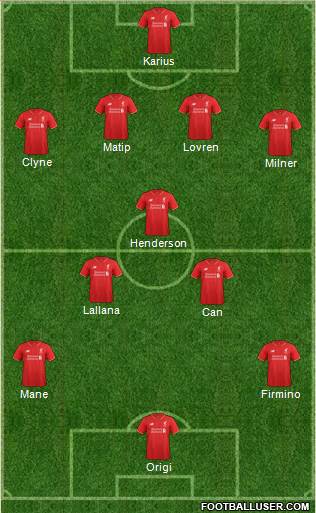