Liverpool take on Middlesbrough at the Riverside Stadium on Wednesday night. Here is the side I think Jurgen Klopp will select for the game:

Liverpool will be looking to get back to winning ways when they take on Middlesbrough at the Riverside Stadium on Wednesday night. Here is the side I think Jurgen Klopp will select for the game:

Goalkeeper: Loris Karius has come under fresh criticism this week following his poor display against West Ham on Sunday but Klopp has once again backed the German youngster so he’s expected to keep his place ahead of Simon Mignolet.

Defence: Dejan Lovren is a doubt for the trip to Teeside after being forced off at half-time at the weekend with cramp so Ragnar Klavan is on stand-by to deputise alongside Joel Matip in the middle of defence.

Otherwise I expect Klopp to stick with James Milner ahead of Alberto Moreno at left-back while Nathaniel Clyne is almost certain to keep his place at right-back.

Midfield: Erme Can is a major doubt as he’s failed to recover from the minor knee injury that kept him out of the West Ham game so Gini Wijnaldum is likely to keep his place in midfield.

Adam Lallana was back in the starting eleven after a prolonged absence with a groin injury and he showed Liverpool what they’ve been missing after opening the scoring with a fine goal so he should start in the middle of the park alongside Jordan Henderson.

Attack: Philippe Coutinho remains out with an ankle injury so Roberto Firmino is expected to continue to operate out wide with Sadio Mane deployed on the opposite flank.

Daniel Sturridge is back in light training after recovering from a calf problem but this game will come too soon for the England international so Divock Origi will continue up front having scored his fourth goal in as many games last time out. 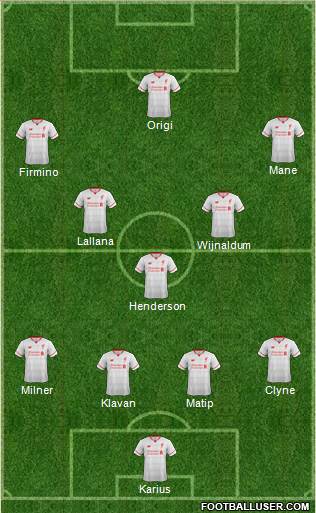