Conte To Make 1 Change To His 3-4-3: Predicted Chelsea XI To Face Sunderland

Chelsea take on Sunderland at the Stadium of Light on Wednesday night. Here is the team we think Antonio Conte will pick for the game:

Chelsea will be looking to cement their position at the top of the Premier League table with a win when they take on Sunderland at the Stadium of Light on Wednesday night.

Goalkeeper: Thibaut Courtois hasn’t put a foot wrong this season so there is no reason to think Conte will even contemplate changing his No.1 tomorrow.

Defence: John Terry is set to once again miss out with a buttock injury that’s kept him on the sidelines for the past three games while there has been no indication that Kurt Zouma is ready to make his first team comeback after building his fitness with the under-23’s following a serious knee injury.

Therefore, I expect Conte will stick with his settled back three that has performed so well over the past couple of months with Gary Cahill alongside David Luiz while Cesar Azpilicueta will be looking to celebrate signing his new contract with another win in the North East.

Midfield: Cesc Fabregas was back on the bench against West Brom at the weekend having filled in for Nemanja Matic against Manchester City the previous Saturday. The Spaniard did come off the bench to play a part in Diego Costa’s winner but I think Conte will stick with Matic alongside N’Golo Kante in the middle of the park against Sunderland.

Victor Moses continues to impress in the right wing-back position so he should keep his place along with summer signing Marcos Alonso.

Attack: Oscar has been strongly linked with a shock move to China today so it looks like his days in west London could be numbered and I’d be surprised if he was included in the squad tomorrow.

Conte may decide to freshen things up in attack with Willian coming in for Pedro having scored a fine goal against City earlier this month. Eden Hazard is almost certain to keep his place in attack while Diego Costa will be looking to build on his superb recent form having scored his 12th of the season last time out. 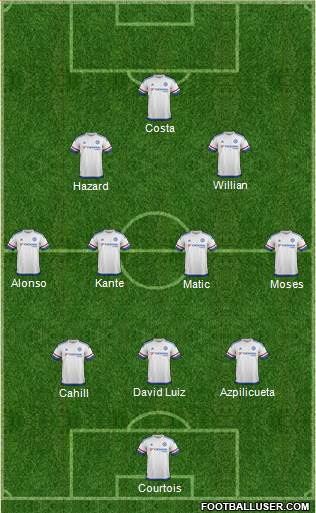