Players from Man Utd, Liverpool, Chelsea and Tottenham have been named in the WhoScored? Premier League Team of the Week following a full mid-week fixture list.

Players from Manchester United, Liverpool, Chelsea and Tottenham have been named in the WhoScored? Premier League Team of the Week following a full mid-week fixture list.

Paul Pogba put in arguably his best performance since his world record move to Old Trafford during United’s 2-1 victory over Crystal Palace at Selhurst Park on Wednesday night.

The French international opened the scoring with a close-range – albeit offside – finish before setting up Zlatan Ibrahimovic for a late winner with a superb ball and he’s not only been named in the TOTW but he’s also been named as the Player of the Week for his rating of 9.76.

Liverpool got back to winning ways with an impressive 3-0 win over Middlesbrough last night and Adam Lallana helped himself to a brace to make the cut while team mate Divock Origi continued his fine form with another goal to also make the TOTW.

Chelsea made it ten league wins on the spin with a hard fought 1-0 win over Sunderland on Wednesday night and Cesar Azpilicueta has made the Team of the Week after earning a rating of 8.19 for his solid display at the back.

Tottenham also got their season back on track with an impressive 3-0 win over Hull and while Christian Eriksen caught the eye with a brace at White Hart Lane, it’s goalkeeper Hugo Lloris who’s made the TOTW thanks to his score of 7.77. 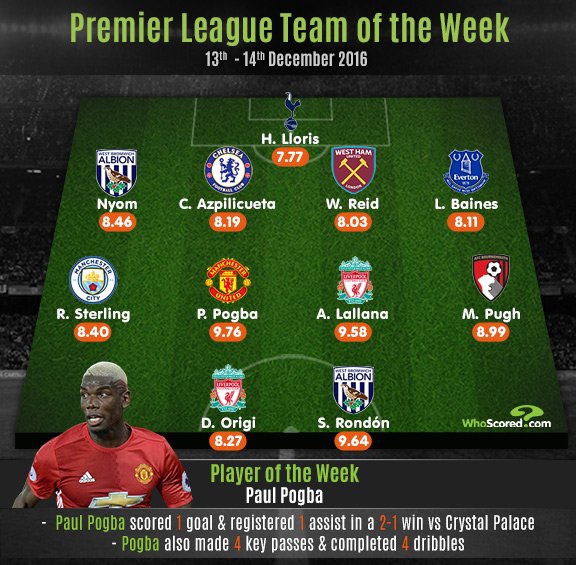