Chelsea take on Crystal Palace at Selhurst Park on Saturday. Here is the team we think Antonio Conte will pick for the game:

Chelsea will be looking to extend their winning streak to an incredible 11 games when they take on Crystal Palace at Selhurst Park on Saturday.

Goalkeeper: Thibaut Courtois will once again line-up between the sticks with the Belgian international firmly established as Chelsea’s No.1.

Defence: John Terry missed out on a place in the squad for Wednesday night’s 1-0 win at Sunderland after failing to prove his fitness following a month out with a buttock injury so we’ll have to wait and see whether he’s back in contention this weekend.

Kurt Zouma was back on the bench after finally recovering from his serious knee injury but I think Conte will stick with his settled back three which has performed so well recently with Gary Cahill alongside David Luiz and Cesar Azpilicueta against Palace.

Midfield: Cesc Fabregas was back in the starting eleven at Sunderland and scored the winning goal so you’d expect the Spanish international has done enough to keep his place alongside N’Golo Kante in the middle of the park.

Nemanja Matic may therefore have to make-do with a place on the bench with Victor Moses and Marcus Alonso keeping their places on the wings.

Attack: Eden Hazard missed the trip to Sunderland with a minor knock but he could be back in contention to face Palace this weekend. If the Belgian international passes his late fitness test then Pedro may be the man to drop out.

That would see Willian retain his place with the Brazilian also supporting Diego Costa in attack. Oscar is unlikely to be involved in the squad amid strong speculation he’s set to complete a shock big-money move to China. 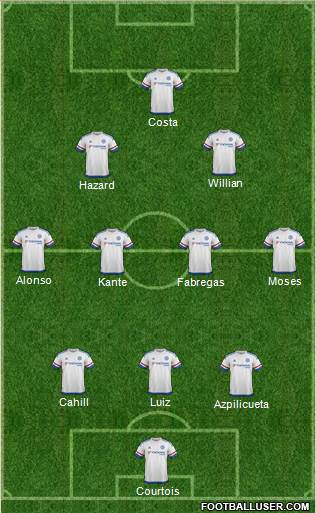