Manchester United entertain Sunderland at the Old Trafford on Boxing Day. Here is the team I think Jose Mourinho will pick for the game:

Goalkeeper: David De Gea is probably one of the first names on Mourinho’s team sheet so he’s certain to retain his place between the sticks on Monday.

Defence: Eric Bailly returned to full training earlier this week after recovering from a minor knee injury which kept him out of the win over West Brom so the Ivorian could come back in to the defence. Phil Jones has been excellent in recent months so Marcos Rojo could be the man to make way with Chris Smalling also having to make do with a place on the bench.

Antonio Valencia is almost certain to keep his place at right-back as the Ecuadorian international has enjoyed an excellent campaign so far while Matteo Darmian appears to have forced his way in to Mourinho’s plans at left-back with Luke Shaw still working his way back to fitness.

Midfield: Mourinho looks to have finally found a settled midfield with Michael Carrick impressing in the holding role and Ander Herrera putting in some outstanding displays alongside the experienced Englishman.

Paul Pogba will once again be given license to roam in a fluid midfield role and the French international will be looking to build on some superb performances of late.

Attack: Henrikh Mkhitaryan is set to return to the squad after shaking off an ankle injury which has kept him out for the last two games. The Armenian international was in excellent form before he suffered the problem against Tottenham earlier this month so he’ll be hoping for an immediate recall in attack.

Wayne Rooney has also forced his way in to Mourinho’s plans in recent games and the 31-year-old could retain his place in the front three with Zlatan Ibrahimovic almost certain to lead the line as he looks to continue his excellent form in front of goal. 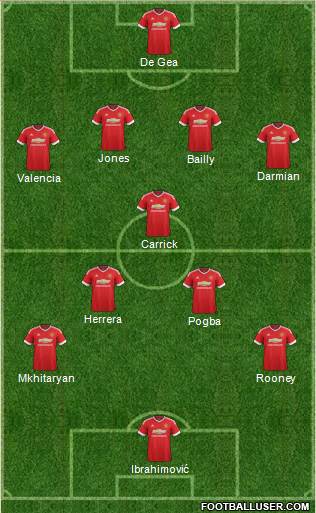