Arsenal take on West Bromwich Albion at the Emirates on Boxing Day. Here is a preview with team news, line-ups, betting tips and predicted score.

Arsenal will look to get their Premier League title challenge back on track when we entertain West Bromwich Albion at the Emirates on Boxing Day.

Last weekend’s 2-1 loss at Manchester City was a bitter blow and it made it consecutive 2-1 defeats after we also relinquished a 1-0 lead to lose at Everton four days earlier.

Those losses have seen us slip to fourth in the table and nine points adrift of leaders Chelsea so we simply have to beat West Brom on Boxing Day or we can kiss the title goodbye for another year.

However, before we can start thinking about the title again we should probably worry about hanging on to the top four as Tottenham are now just one point behind while Manchester United are a further three adrift so we desperately need to get back to winning ways.

That won’t be an easy task though as West Brom are enjoying an excellent season so far and despite losing to Chelsea and United in recent weeks, Tony Pulis’ side are still sitting eighth in the table.

Aaron Ramsey is back in contention after returning to full training with the Welsh international finally recovered from a hamstring injury that’s kept him out of our last three games.

However, Alex Oxlade-Chamberlain has been ruled out with his own hamstring complaint – although the midfielder could be back for the Crystal Palace game on New Year’s Day.

We were handed a major boost after Danny Welbeck resumed full training on Friday after recovering from a knee injury which has kept him out for seven months but the attacker is going to need plenty of time to rebuild his fitness before he’ll be available.

Shkodran Mustafi remains out with a hamstring injury while Per Mertesacker is still working his way back to full fitness and Santi Cazorla is out until February following ankle surgery.

West Brom will hand a late fitness test to James Morrison as he’s been suffering from flu this week but Jonny Evans could return to the squad after missing the last two games with a calf problem. 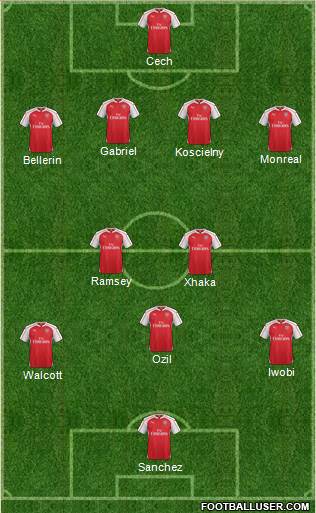 Arsenal 2-1 West Brom: The Gunners simply have to win this game if we’re to retain any realistic hopes of catching Chelsea but I think it’s going to be a tough match. We’ll no doubt have a hangover from our recent defeats and West Brom are a very difficult side to play against. However, hopefully we’ll have enough to secure all three points.

Arsenal are the 7/20 favourites to win the game but we can get you enhanced odds of 4/1 on the Gunners – just click here to take advantage of these crazy odds. However, here are some other bets I like the look of: