Manchester United entertain Middlesbrough at Old Trafford on New Year’s Eve. Here is the team I think Jose Mourinho will pick for the game:

Manchester United will look to continue their push for the top four when they entertain Middlesbrough at Old Trafford on New Year’s Eve.

Goalkeeper: David De Gea is certain to keep his place this weekend as he’s probably one of the first names on Mourinho’s team sheet.

Defence: Eric Bailly is back to full fitness after recovering from a minor knee injury so the Ivorian could come back in to the defence with Marcos Rojo the unfortunate man to make way as Phil Jones has been excellent in recent months.

Matteo Darmian could get a recall at left-back with Daley Blind dropping to the bench but Luke Shaw is expected to once again miss out with a niggling ankle injury that’s hampered this season.

Antonio Valencia should retain his place at right-back but Chris Smalling may have to make do with a place on the bench.

Midfield: Michael Carrick and Ander Herrera have continued to impress in the middle of the park so I expect they’ll keep their places on Saturday – although Mourinho may have to give Carrick a rest for the game against West Ham two days later.

Wayne Rooney missed the win over Sunderland with a thigh injury and remains a doubt to face Middlesbrough so Paul Pogba will once again be given license to roam in a fluid midfield role and the French international will be looking to build on some superb performances of late.

Attack: Henrikh Mkhitaryan could be given a recall in attack after coming off the bench to score a stunning scorpion kick against Sunderland last time out.

Juan Mata could make way with Jesse Lingard keeping his place having started in the last two games while Zlatan Ibrahimovic is expected to continue up front after extending his goal-scoring run on Monday. 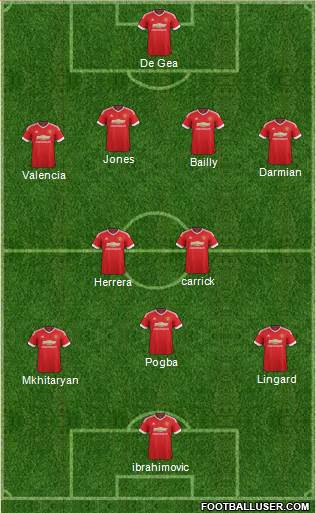