Liverpool take on Sunderland at the Stadium of Light on Monday afternoon. Here is the side I think Jurgen Klopp will select for the game:

Liverpool will be looking to keep the pressure on leaders Chelsea when they take on Sunderland at the Stadium of Light on Monday afternoon. Here is the side I think Jurgen Klopp will select for the game:

Goalkeeper: Simon Mignolet has kept goal for the last four games and hasn’t really put a foot wrong so it looks as though he’s back in favour and should keep his place tomorrow.

Defence: We’ll have to wait and see whether Klopp decides to freshen things up as they get ready to play their second game in three days but I think the Reds boss will want to maintain continuity so will stick with the majority of the side that beat Man City yesterday.

Joel Matip is expected to once again miss out as he continues to nurse a niggling ankle injury that’s kept him out recently so Ragnar Klavan is set to continue alongside Dejan Lovren at the back.

Nathaniel Clyne will retain his place at right-back while James Milner should once again keep Alberto Moreno out of the team at left-back.

Midfield: Jordan Henderson is set to miss out after being forced off during yesterday’s win over Man City with a heel injury. The problem will be further assessed before we’ll know the full extent of the injury but the skipper is expected to sit out the trip to Sunderland.

Erme Can will therefore continue in midfield alongside Gini Wijnaldum while Adam Lallana may move back in to a more central position tomorrow.

Attack: With Lallana back in the middle of midfield that may see Roberto Firmino move back out to the wing which would leave a void to be filled up front.

Divock Origi will be hoping to get a recall but Klopp may opt to give Daniel Sturridge a start with the England international coming in to the side up front.

Philippe Coutinho is back in light training after recovering from an ankle injury but isn’t in contention just yet while Sadio Mane will play his final game before heading off to the African Cup of Nations. 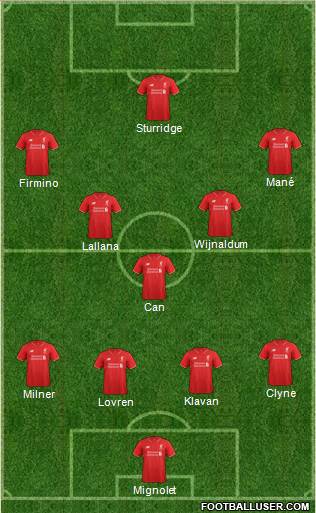