Arsenal take on Preston in the 3rd round of the FA Cup tomorrow evening. Here is a preview with team news, line-ups, betting tips and predicted score.

Arsenal will look to book their place in the fourth round of the FA Cup when we take on Preston North End at Deepdale on Saturday evening.

It’s been another turbulent week in north London following the fall out of our dramatic 3-3 draw at Bournemouth on Tuesday night which many predicted had ended our title hopes for another year.

However, Chelsea’s defeat at Tottenham on Wednesday has breathed new life in to the title race with just ten points separating the top six teams so there is still plenty left to play for in the league.

But our thoughts must now turn to FA Cup matters and we’ve been handed a tricky third round tie at Preston so the players are going to need to be fully focussed if we want to book our place in the fourth round draw.

Arsene Wenger is set to rotate his squad in order to give some of his key men a rest with Laurent Koscielny, Petr Cech, Hector Bellerin and Alexis Sanchez among those who could be given a breather.

Mesut Ozil returned to training on Thursday after missing the last two games with flu but the German international won’t be rushed back tomorrow while Theo Walcott is still nursing a calf injury that’s kept him out for three games.

Kieran Gibbs has also been ruled out after failing to overcome a knee injury while Francis Coquelin has been ruled out for at least three weeks with a hamstring strain.

Mohamed Elneny is off to the Africa Cup of Nations so Wenger may have little choice but to start Aaron Ramsey alongside Granit Xhaka – although he may be tempted to give Ainsley Maitland-Niles a run out.

Lucas Perez faces a late fitness test on an ankle injury but Danny Welbeck could be in the squad for the first time since suffering a knee injury back in May 2016.

As for Preston, they’ll be without suspended striker Jermaine Beckford but the Championship outfit are expected to name a strong side. 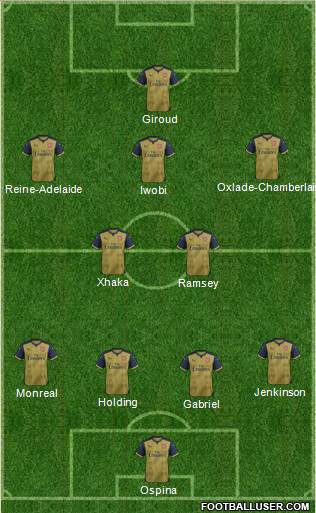 Preston 1-2 Arsenal: Whatever you think of drawing at Bournemouth, we did show create spirit to come from 3-0 down to salvage a point but our performance for the first 60 minutes is a real worry. I’m putting it down to fatigue so the good news is we should see plenty of fresh legs against Preston. I think this is going to be a tough game but their home form has been poor as they’ve won just one of their last six games at Deepdale so I’m going to back the boys to win 2-1.

Arsenal are the 4/9 favourites to win the game but we can get you enhanced odds of 6/1 on the Gunners – just click here to take advantage of these crazy odds. However, here are some other bets I like the look of: