Arsenal face a tricky away trip but Man Utd, Chelsea, Tottenham and possibly Liverpool are all at home in the fourth round of the FA Cup….

Arsenal face a tricky away trip but Man Utd, Chelsea and Tottenham are all at home in the fourth round of the FA Cup….

The draw for the fourth round of the FA Cup has been conducted tonight and as usual it’s thrown up some intriguing ties.

Arsenal edged in to the fourth round after coming from behind to beat Preston North End 2-1 at Deepdale on Saturday evening with Olivier Giroud scoring late on to see off the Championship outfit.

The North Londoners will now face another tricky away trip as they’ve been drawn away to face the winner of a replay between Norwich City or Southampton after they drew 2-2 at Carrow Road at the weekend.

Chelsea breezed in to the next round after beating Peterborough United 4-1 at Stamford Bridge on Sunday despite John Terry seeing red and Antonio Conte’s men will now face Brentford in the next round.

Manchester United booked their place in the fourth round after thrashing Reading 4-0 at Old Trafford on Saturday with Wayne Rooney opening the scoring to become the clubs all-time record goal-scorer. Jose Mourinho’s side will now take on local neighbours Wigan Atheltic at Old Trafford in the next round.

Tottenham scored two second half goals to see-off Aston Villa at White Hart Lane in the third round and they’ll now entertain Wycombe Wanderers in the next phase.

Manchester City eased in to the fourth round with a 5-0 thrashing of West Ham at the London Stadium on Friday night and they’ll now face a trip to face Crystal Palace or Bolton Wanderers in the next round.

Liverpool will need a replay at Home Park after being held to a disappointing 0-0 draw by Plymouth Argyle at Anfield yesterday and the winners will entertain Wolverhapton Wanderers.

Arsene Wenger would have liked a home draw and a tricky away trip is probably the last thing the Gunners would have wanted but Chelsea, United, City, Spurs and Liverpool if they get through will all be confident of winning their games on home soil.

The ties are due to be played on the weekend of 27th January, here is a full run-through of the draw: 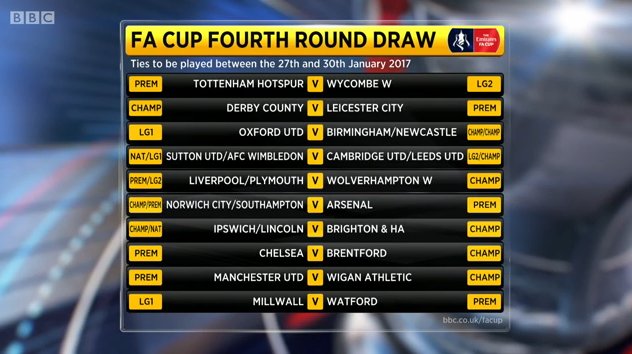