Tottenham entertain West Bromwich Albion at White Hart Lane on Saturday lunchtime. Here is the side we think Mauricio Pochettino will select for the game:

Goalkeeper: The Argentinean coach is set to recall his big guns after resting several of his key men for the FA Cup win over Aston Villa last week so we should see Hugo Lloris restored between the sticks with Michel Vorm dropping out.

Defence: There will also be a couple of changes at the back with Jan Vertonghen coming back in for Kevin Wimmer while Eric Dier should drop back in to the middle of defence with Cameron Carter-Vickers making way.

Toby Alderweireld should keep his place after playing the full ninety minutes against Villa with Pochettino playing a three-at-the-back formation.

Midfield: Kyle Walker and Danny Rose should get recalls in the wing-back roles with Kieran Trippier and Ben Davies dropping out while Victor Wanyama should also come back in to the defensive midfield role after the trio were rested last time out.

Mousa Dembele is expected to be given a recall in midfield after also being given a breather against Villa with youngster Harry Winks making way.

Attack: It should be all-change in attack on Saturday with Dele Alli and Christian Eriksen expected to come back in to the starting eleven meaning Moussa Sissoko and Hueng-min Son will drop out.

Harry Kane is certain to get a recall with the Spurs top-scorer replacing Vincent Janssen up front after the Dutch international endured a frustrating afternoon against Villa.

Erik Lamela remains Tottenham’s only injury concern with the attacker still over in Rome working his way back to full fitness following a hip injury that’s kept him out for over two months. 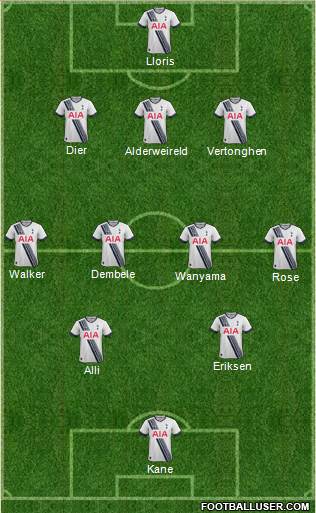