Manchester United take on Liverpool at Old Trafford on Sunday afternoon. Here is the team I think Jose Mourinho will pick for the game:

Manchester United will be looking to give their title challenge a major boost when they take on Liverpool at Old Trafford on Sunday afternoon.

Goalkeeper: David De Gea was back between the sticks for the EFL Cup semi final win over Hull City in midweek after being rested against Reading last weekend and the Spaniard is certain to keep the gloves on Sunday.

Defence: Marcos Rojo could be back in contention after missing the Hull game with a muscle injury sustained last weekend. Mourinho is confident the Argentinean international will be passed fit but the Red Devils boss may opt to stick with Chris Smalling alongside Phil Jones at the back.

Antonio Valencia is almost certain to start at right-back but we could see Daley Blind come in for Matteo Darmian at left-back. Eric Bailly is unavailable as he’s preparing for the Africa Cup of Nations.

Midfield: Michael Carrick is expected to come back in to the starting eleven after being rested in midweek which could see Marouane Fellaini miss out despite getting himself on the score-sheet in the League Cup. Ander Herrera will continue in the middle of the park while Paul Pogba should move in to the advanced midfield role with Wayne Rooney dropping out.

Attack: Zlatan Ibrahimovic is set to be recalled after missing the win over Hull through illness and he should be fresh having also been rested for the FA Cup win last weekend.

Henrikh Mkhitaryan should keep his place in attack but we could see Mourinho freshen things up by recalling Anthony Martial which would see Juan Mata make way.

Marcus Rashford is likely to find himself back on the bench along with the likes of Jesse Lingard and Rooney.

CHECK OUT OUR PREDICTED LIVERPOOL LINE-UP 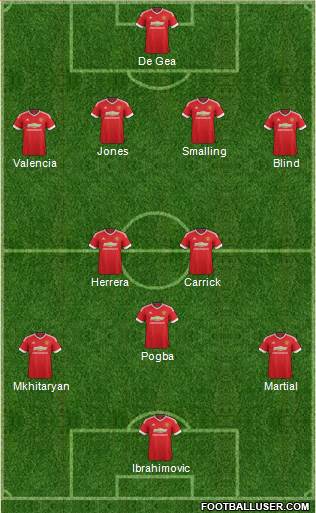 United head in to the game knowing a win would see them move to within just two points of Liverpool but t’s always difficult to predict results in the Premier League and that’s where Odinbet comes in….

Odinbet is FREE to use, and statistical analysis for games played in world football’s top 12 leagues. Use the filter system to refine which games you should bet on and view the analysis that mathematical system produces to give yourself a better chance of winning money on the Man Utd v Liverpool game.