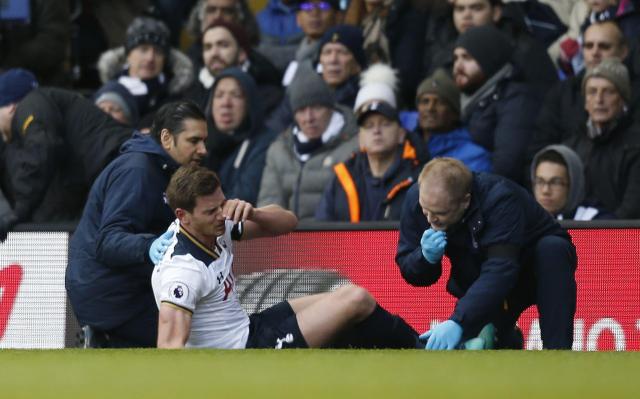 Tottenham Hotspur fear Jan Vertonghen is facing up to 10 weeks on the sidelines with an ankle injury after scans confirmed the defender has suffered ligament damage, according to the Telegraph.

Vertonghen was forced off in tears midway through the first half of Tottenham’s comfortable 4-0 victory over West Bromwich Albion on Saturday afternoon and Mauricio Pochettino confirmed after the game that the injury looked a serious one.

The Telegraph claim that Vertonghen is already expected to miss at least six weeks but the north Londoners now fear the centre-back could be out for up to 10 weeks after he underwent a scan which confirmed the bad news.

The newspaper says that the results show the injury is between a grade two and three which has left the clubs medical department believing Vertonghen won’t play again until the end of March.

It’s said in the report that the Belgian international is ‘devastated’ by the timing of the injury as Tottenham have been playing some superb football which has seen them emerge as a serious challenger for the Premier League title.

Spurs moved up to second in the table following the win over West Brom so losing Vertonghen will come as a major blow to Pochettino as the 29-year-old has been a key player in his starting eleven this season.

The defender will now miss Saturday’s crucial clash with Manchester City as well as the showdown with third-placed Liverpool next month while Vertonghen could miss at least 11 matches in all competitions if he doesn’t return until the end of March.

Pochettino will now have to decide how to cope without the Belgian for the foreseeable future with Kevin Wimmer favourite to fill-in if the Argentinean coach sticks with his back three, but he may opt to switch to a flat back four following Vertonghen’s untimely injury.