Tottenham take on Sunderland at the Stadium of Light on Tuesday night. Here is the side we think Mauricio Pochettino will select for the game:

Tottenham Hotspur will be looking to keep the pressure on leaders Chelsea with a win when they take on Sunderland at the Stadium of Light on Tuesday night.

Goalkeeper: The Argentinean coach is set to make wholesale changes to his side that edged past Wycombe Wanderers on Saturday with Hugo Lloris coming back in for Michel Vorn in goal.

Defence: Toby Alderweireld missed the FA Cup win with a minor hamstring injury that he suffered against Manchester City last week but Pochettino has confirmed the Belgian international will return to the back three tomorrow.

Jan Vertonghen is making good progress in his recovery from an ankle injury but this game comes too soon so Kevin Wimmer could keep his place at the back alongside Eric Dier with youngster Cameron Carter-Vickers dropping out.

Midfield: Kieran Tripper put in a solid display in the FA Cup win but he has been ruled out with a knock so Kyle Walker will come back in on the right wing while Danny Rose has recovered from a minor knee problem to replace Ben Davies on the left.

Victor Wanyama and Mousa Dembele were rested against Wycombe but they will come back in to the middle of the park with Moussa Sissoko and youngster Harry Winks missing out.

Attack: There should also be changes in attack with Dele Alli set to get a recall after coming off the bench to inspire Tottenham’s comeback win at the weekend while Christian Eriksen should also resume his spot in the front three.

Youngsters Josh Onomah and Georges-Kevin Nkoudou will make way after disappointing performances on Saturday while Harry Kane will come back in up front after missing the Wycombe game with a minor groin problem. Hueng -min Son may feel unfortunate to miss out after scoring two crucial goals at the weekend.

Mauricio: "@trippier2 needs a few days more to recover so he's out. @JanVertonghen is doing well & needs more time but is progressing well." 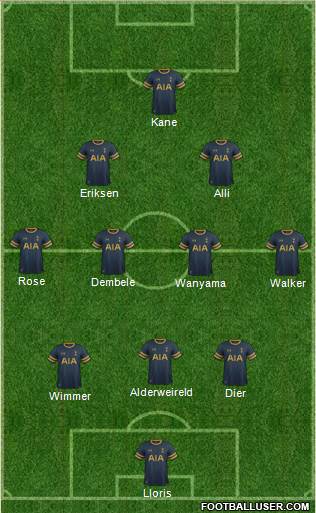 If watching the likes of Chelsea, Tottenham Hotspur and Arsenal battling for the title has whetted your appetite, why not grab your mates and a ball and get down to your local Goals arena to see if you can unleash your inner Kane?