Tottenham entertain Middlesbrough at White Hart Lane on Saturday evening. Here is the side we think Mauricio Pochettino will select for the game:

Tottenham Hotspur will be looking to get back to winning ways when they entertain Middlesbrough at White Hart Lane on Saturday evening.

Goalkeeper: Hugo Lloris is expected to be immediately recalled to the starting eleven after missing the 0-0 draw at Sunderland in midweek through illness. Michel Vorm is therefore set to make way.

Defence: Pochettino may opt to revert back to a three-man defence on Saturday which could see Kevin Wimmer come back in to the side after being left on the bench in miweek.

Jan Vertonghen remains out with an ankle ligament injury so Eric Dier should keep his place at the back alongside Belgian international Toby Alderweireld.

Midfield: Spurs have been dealt a huge blow after Danny Rose suffered a knee injury at the Stadium of Light. There has been no official word on the severity of the injury but Rose is expected to be on the sidelines for some time so will miss out this weekend.

Ben Davies is the man set to come in on the left side of midfield while Kyle Walker will keep his place on the opposite flank with Kieran Tripper still out with a hip problem.

I don’t expect there to be any changes in the middle of the park so Victor Wanyama should continue alongside Mousa Dembele.

Attack: Tottenham were frustrated in their attempts to break down Sunderland on Tuesday but Pochettino is still unlikely to make wholesale changes in attack.

With the formation switch, we could see Hueng-min Son drop down to the bench leaving Dele Alli and Christian Eriksen to support Harry Kane in attack. However, Erik Lamela remains unavailable as he continues to work his way back to fitness following a serious hip injury. 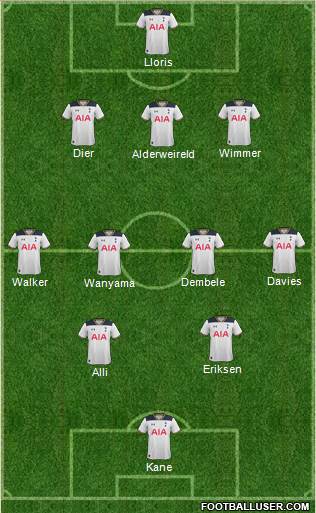