Liverpool travel to the KCOM Stadium to take on Hull City on Saturday afternoon. Here is the side I think Jurgen Klopp will select for the game:

Liverpool need to get back to winning ways following a poor run of form in January when they travel to the KCOM Stadium to take on Hull City on Saturday afternoon. Here is the side I think Jurgen Klopp will select for the game:

Goalkeeper: Simon Mignolet went from zero to hero in midweek after being criticised for his part in David Luiz’s opener before saving Diego Costa’s second half penalty to earn Liverpool a 1-1 draw with Chelsea, so I think we’ll see the Belgian retain his place ahead of Loris Karius.

Defence: Nathaniel Clyne returned to the starting eleven on Tuesday after missing the previous two games with a rib injury and the England international has suffered no reaction so is expected to start this weekend.

James Milner will continue at left-back ahead of Alberto Moreno while Joel Matip and Dejan Lovren should continue their partnership in the middle of defence so I think we’ll see the same back four that faced Chelsea.

Midfield: There shouldn’t be too many changes in midfield as Jordan Henderson is managing an on-going heel injury so he should keep his place while Gini Wijnaldum could have done enough to retain his spot in midfield after scoring the equaliser on Tuesday.

Adam Lallana may be moved back in to a central position – where he’s impressed this season – meaning that Emre Can might be the man to miss out.

Attack: With Lallana back in the middle it will open the door for Sadio Mane to be recalled to the starting eleven after making a successful return off the bench against Chelsea.

The Senegal attacker may not be 100% due to a minor knee problem but I still think we’ll see him start as this is a game Liverpool simply have to win if they’re to retain any hopes of catching Chelsea.

Philippe Coutinho is almost certain to keep his place while Roberto Firmino should continue to lead the line up front with the likes of Daniel Sturridge and Divock Origi on the bench.

BACK LIVERPOOL TO BEAT HULL AT CRAZY ODDS OF 7/1 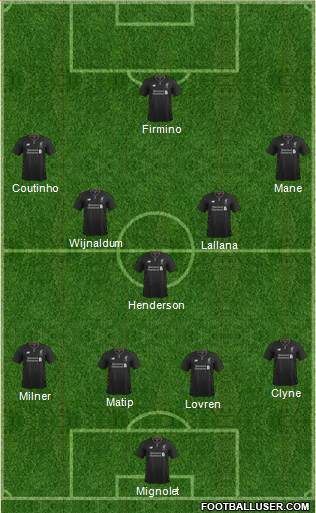 Liverpool are the favourites to win the game but as the midweek results showed us its always difficult to predict results in the Premier League and that’s where Odinbet comes in….

Odinbet is FREE to use, and statistical analysis for games played in world football’s top 12 leagues. Use the filter system to refine which games you should bet on and view the analysis that mathematical system produces to give you the best chance of making money from the Hull vs Liverpool game.